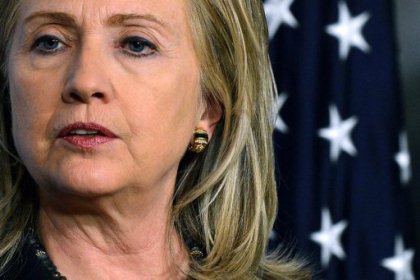 U.S. Secretary of State Hillary Clinton on Friday expressed concern that interminable unrest in Syria is "contributing to instability" in neighboring Lebanon.

Armed clashes between supporters and opponents of Syrian President Bashar Assad's regime have taken place in recent weeks in both the northern city of Tripoli and the capital Beirut.

"The United States is concerned that developments in Syria are contributing to instability in Lebanon," Clinton said in a statement.

"We encourage all parties to exercise restraint and demonstrate respect for Lebanon's security and stability," the chief U.S. diplomat added.

"We call on the Syrian regime to stop the violence against its own people and fully implement the Annan Plan," she said.

"The regime needs to institute a peaceful, democratic transition now. We remain committed to a unified, stable, sovereign, and independent Lebanon," Clinton added.

In addition to the clashes in Tripoli and Beirut, 11 Lebanese Shiite pilgrims were abducted in northern Syria as they made their way home from a pilgrimage in Iran, which is Assad's key ally.

The rebel Free Syrian Army has been accused of kidnapping them, claims it has denied.

Health Minister Ali Hassan Khalil said the pilgrims were freed on Friday and arrived in Turkey.

If serious US pressure was applied for regime change in march-august 2011 when the revolution was still largely peaceful all the violence that we are seeing today would have been averted. This is the result of having Israel's love for Assad in western calculations. It is too late now, the genie is outside the bottle, after 12000 killed the violence in Syria is irreversible and there will be revenges for years to come even if the regime goes tomorrow. Most likely lebanon will be dragged into the mess, hard to imagine how it will not.

I agree with your comment, but there is still a way to vert repercussion: a real policy of distancing lebanon from the syrian events.
but that will not happen as long as hizbushaitan is in power through their weapons.

I agree with all your comments. But hopefully, you are all wrong. I have faith that Lebanon will survive all these problems.

i disagree with you slash, those days are over, the regime in syria is weaker by the day and bashar is politicaly finished and we are living the last chapter. The point i was making is that the problems will not be over merely by his departure. It is too late for peace to prevail even in that event. The revenge wars will linger in syria for many years to come and most likely will spread to lebanon.

Thats all you do condemn and get concerned ... enough talk do some action .

Mrs. Clinton, spare us your concern and arm our army instead. This will be more useful than crocodile tears.

Are US citizens still allowed to travel abroad to Lebanon?