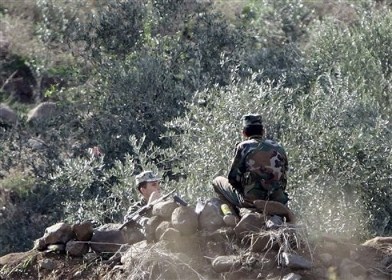 The residents in the area blocked the international road in protest against the development.

VDL (93.3) later said that Mohammed succeeded in escaping from the Syrian troops.

LBC television later reported that two people were wounded in the town of al-Hisheh in the border region of Wadi Khaled when gunshots were fired from the Syrian side of the border.

Earlier on Wednesday, Lebanese citizen, Nasser Arabi, was released after being arrested by Syrian troops in the outskirts of the town of Kfarqouq in Rashayya on Sunday.

His brother told MTV that he was transported to Lebanon from Damascus in MP Faisal al-Daoud’s vehicle, saying that he is doing well.

Reports speculated that the three individuals were trying to smuggle cigarettes into Syria when they fell victim to an ambush set up by the Syrian forces in the border area of Kfarqouq in northeastern Lebanon.

Time to block the road and kidnap passing Syrians every-time a Lebanese is being kidnaped. This sounds like an eye for an eye BUT a terrorist regime only speaks uno language and has be spoken to with the same language.

bah! if they were from the south hezbollah would have launched a huge protest against it... but since they are not with them, what the heck! for hezb some lebanese are better than others!