Asir Accuses Syria, Allies of Launching Campaign against him 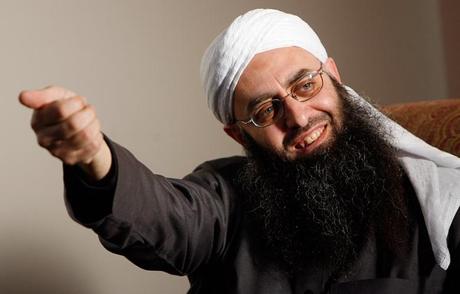 Imam of Sidon's Bilal bin Rabah mosque Salafist cleric Ahmed al-Asir considered on Tuesday that the campaign against him by the Syrian regime and its allies is linked to his opposing stances.

“The allies of the Syrian regime are besieging me” by turning the Sunnis against him, he told the Kuwaiti al-Seyassah newspaper.

Asir pointed out that the Syrian regime wants to maintain its hegemony on the Lebanese people by “enslaving them to the regime.”

“Anyone who dares to say no or demands his rights will be humiliated and even killed,” he said.

Asir stressed that he will continue “struggling until balance returns to the country and peace prevails.”

He slammed Hizbullah and AMAL, accusing them of taking over the political decision of the state.

“If they continue to dominate the political decision-making through controlling the army, the dignity of the Sunni sect and the state institutions, things will never be set straight,” Asir told the daily.

On Friday, the Imam threatened AMAL leader Speaker Nabih Berri and Hizbullah chief Sayyed Hassan Nasrallah that he “will haunt their nights” if a toy machine gun wasn’t banned from Lebanon.

Aisha is considered by many Sunnis as the favorite wife of the Prophet, but is unpopular among Shiites, who make up the majority of southern Lebanon’s population.

However, the General Security Department issued a communique on Saturday denying that these toys insult a religious figure after launching a probe into the case.

It noted that “the claims were not true and not based on facts as they were only rumors.”

It's not toy guns but the machine gun in connection with the word Allah in their flag that insults them. Who translated this article ?

As i read before this week here, some said that according to Hezbollah God is Russian and was born in 1947. That was hilarious because the logo the terrorist party uses is an AK47. If anyone remembers who wrote this I'd appreciate to know.

I'm not M14 Tania but no thats not what M14 is supporting...some objectivity for god's sake!

@tania,
no this is not what m14 staands for, nor it is what the sunnis stand for for that matter.
sunnis in lebanon are the moderate people, and this phenomenon seems to be the creation of some secret service to create the sort of radicalism to justify the radicalism of the shia.
however the shia are completely radicalized without the need for such a person in their ranks.
we see the shia radicalism in action in Lassah... and all over everyday...

Hizballa and el Asser are the same? You guys just say anything to diss Hizballa? "the shia are completely radicalized"? ya 3ayn.. more than people like aseer it's people like you that destroying this country..

Because this retard Sunni is and sidonian implies that M14 is supporting him? Wake up Tania (AKA FT/Mowaten). Don't waste your time and our time with your dumb comments. The guy enjoys freedom of speech, a democratic value that we cherish. Your friend Nasrallah does as well although he silenced Rafic Hariri and the others forever....

your sayyed is zoo all by himself.....

assiri is an abou moussa replay, abou moussa come from nowhere with a loud voice to challenge arafat as not doing enough for the palestinians turns out he was nothing more than a syrian agent tasked with splitting the plo

the syrians they did it with the sspn in the 70's to regain total control over the party, with the plo in the 80's, attempted to do it with the kataeb in the 90's and now this, assiri got their fingerprints all over him history keeps repeating itself and people are oblivious to it

My Dear Lebanon has been torn apart.

No fear. It's all a show. We, Lebanese are immune to propaganda. This farce has no authority.

If Syria is that powerful then how does Dr. Samir Al Asir Geagea expect the Assad regime to fall this year? How? Perhaps Dr. Al Asir Geagea has a new vision and he is not telling us about it thinking that we like surprises!

uh why is his face covered in pubic hair?

this thug should not be given any media coverage because it is blowing him out of proportion...not everybody who starts making threats in public should be media coverage like this!

He's a minority of One. Hariri (a moderate) should disassociate himself from him, not to mention Mikati as well.

to all those who said that 14 are not supporting this dude, who do you think is arming and financing them ?

Mr Asir,is your intention for a united Lebanon or yoir intention is for the Umma alone?

for all those who think that the 14 do not support these clowns, who the hell is financing and arming them ?

this asir the illiterate doesn't know English, and he thinks the gun insults Aisha...wow...what a country...when the absolute bottom of society can threaten because of their ignorance

This man make sense more than Hassoun,all what he said, if you hold the arms every one will be holdind arms, a truth nobody can deny

even though tis man is an extremist his speeches make more sense than any other speeches of M8....

There is only one truth "Hezbollah wants to rule our country with the lowest forms of decadence and ignorance to ever exist in the 21st century" All M8 supporters are actually supporting either their sick ideology or their own shallow interests.
God Bless every patriotic Lebanese christian or muslim. The clock is ticking faster, soon the time will come for every radical and terrorist group in the middle east and the arab world to vanish, because their supporting leaders will fall. I have hope, and let's keep the faith.