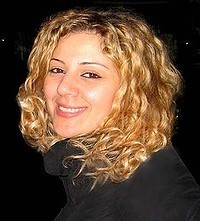 According to Lebanon’s National News Agency, the ICC members are in good health and will be transferred from Zintan area, where they are being held, to Tripoli and later to Rome.

In June, the ICC team was detained in Tripoli for alleged “espionage”, after the Zintan rebels accused them of sharing and exchanging documents with Seif al-Islam, son of Moammar Gadhafi.

In addition to Assaf, the team comprises Australian lawyer Melinda Taylor, and two colleagues (Spanish and Russian) who voluntarily chose to stay with their colleague.

Libyan authorities said that Assaf and Taylor are accused of “espionage” and “contact with the enemy” after exchanging certain documents with Seif al-Islam.

The ICC says the team went to discuss appointing a lawyer on behalf of Seif al-Islam upon his choice.

what a hottie, no wonder they're keeping her captive.