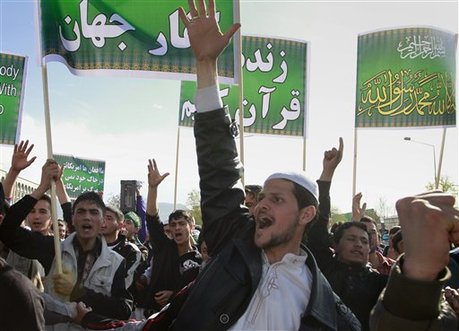 Nine people were killed during protests in the southern Afghan city of Kandahar on Saturday against the burning of a Quran in the U.S., officials said.

The demonstration came a day after seven U.N. staff were killed in an attack on their office in similar protests in the northern city of Mazar-i-Sharif.

The Kandahar protests began in the city centre and spread to other locations as police clashed with crowds marching towards the U.N. offices and provincial administration headquarters, witnesses said.

"Death to America" and "Death to Karzai" chanted the demonstrators. "They have insulted our Quran," shouted one.

At least nine people were killed and more than 73 injured during violent clashes between demonstrators and security forces, the Kandahar provincial administration said in a statement.

"Today as result of violent demonstrations in Kandahar city 73 people are wounded and nine people are martyred," it said.

It blamed "destructive elements" for turning the protests violent. The protesters damaged government and private buildings and torched vehicles, it added, saying 16 people, seven of them armed, had been arrested.

By noon most of the protesters had abandoned the streets, an official and an Agence France Presse reporter said.

Kandahar is the spiritual heartland of the Taliban, who have fought an insurgency against President Hamid Karzai's government in Kabul and its Western allies since they were ousted by a U.S.-led invasion in 2001.

Zalmai Ayoubi, a spokesman for the provincial administration told AFP that all those killed and injured were from the crowds. He said several cars, a large bus and a girls' school had been set ablaze by the protesters.

Protesters mounting a similar demonstration Friday in Mazar-i-Sharif against the burning of a Quran at a church in Florida stormed a U.N. compound and killed seven staff, the worst attack on the world body in the country since the 2001 invasion.