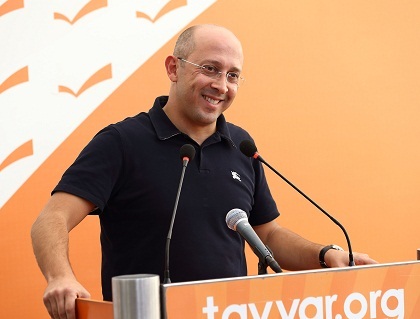 Change and Reform bloc MP Alain Aoun announced on Wednesday that the bloc will no longer cooperate with the Lebanese Forces and Phalange Party at the Bkirki committee aimed at devising a new parliamentary electoral law.

He said during a press conference: “We are no longer concerned with any joint work with the members of the Bkirki committee on devising a new electoral law.”

Aoun said that the Bkirki committee had placed a priority on the Orthodox Gathering proposal on the electoral law and later a proposal on the adoption of small electoral districts and then one of proportional representation based on 15 medium-sized districts.

He noted that once the Orthodox Gathering proposal was rejected, talks shifted to the third suggestion on the adoption of 15 medium-sized districts, which was approved unanimously by all Bkirki committee members.

The MP revealed that discussions on small districts, amounting to 50, have not ended.

“It is worth noting that the LF and Phalange Party backed down from their commitment to the electoral law based on proportional representation after the Mustaqbal and Progressive Socialist Party voiced their opposition to it,” he added.

“We have no problem in working with people we enjoy political differences with, but we have a problem with people who lie to us,” he stressed in reference to the political powers.

“We will only return to the talks if Maronite Patriarch Beshara al-Rahi asks us to,” explained the MP.

“The LF and Phalange Party are entitled to back down from previous commitments, but they have to acknowledge it,” said Aoun.

The Mustaqbal bloc and PSP, headed by MP Walid Jumblat, objected to the proposal.

LF leader Samir Geagea noted on Tuesday that the adoption of small electoral districts in a parliamentary electoral law will be more just for the Lebanese people, reported the Central News Agency.

He told the agency: “Contacts are underway with the Hizbullah and AMAL leaderships over the small districts.”

“If it is determined that the least amount of blocs are in agreement over the small districts, then the Free Patriotic Movement will have to agree with it,” Geagea said.

The FPM is trying to contradict what was agreed upon among the members of the Bkirki committee, said Geagea.

The patriarch was aware of such an attempt and thwarted it and the result was an agreement over small electoral districts, he stated.

Al-Rahi meanwhile gave members of the Bkirki committee ten days to contact their leaderships and resolve their differences on an electoral draft-law proposal, An Nahar daily reported on Wednesday.

The 10-day deadline was the result of a dispute on Monday between the FPM on one side and the LF and the Phalange Party on the other.

The committee was meeting under al-Rahi when Phalange MP Sami Gemayel and LF lawmaker George Adwan criticized an electoral draft-law approved by the government, including ministers loyal to FPM chief Michel Aoun.

After a dispute between Gemayel and MP Alain Aoun, Adwan intervened by saying that members of the committee - that includes the four main Christian parties in Lebanon - had agreed on adopting small districts in a winner-takes-all system.

If that was not possible, then the second option would be to adopt proportionality, Adwan said.

as if FMP and Aoun are interested in the good of christians in lebanon. how can they be when they support syria conrol, hezbolah authority, and would rather see civil lawlessness than a democratic free lebanon state.

what a loser!!! you put the interests of your Syrian BOSSES above those of Lebanon...TRAITOR!!!

The Christian "elite" of M14 have a thorough and vast history of corruption and anti-Christianism. This news comes as no surprise because what else can be expected from Christian militias who have killed more Christians, and caused more emigration for them than any Muslim party? The Gemayels, Geagea's, and Chamouns will go down in history as the undertakers of Christianity in Lebanon.

fpm convieniently forget the murdors of aoun :) killing children coming out of schools in Beirut among other things...
name calling does not do any good, as all are guilty of these matters.
however, it is aoun actions that have marginilized the position of christians in Lebanon, especially through his association with the remaining terrorist states in the region, namely the syrian regime and iran.
hoping that one day fpmers will wake up.

ohhhhhhhhhhhhhhh! it seems I hit a nerve :)
it seems fpmers have selective amnesia :)
they forget what they want and in this case: aoun's army pounding children coming ut of schools in verdun.
this is a fact, go check it out

all i hear is blah blah blah coming out of all these Aounist!they talk shit just like there leader.i wonder if they run like him also.
Long Live The Syrian Civil War that was supposed to be finished 1 year ago according to the Great Aoun himself.

Aoun mafia at work... All they can do is sabotage the country a la Samaha style. Good for them, from 2013 and onwards they'll always be in the opposition. They're doomed to fail in whatever they undertake.

the1phoenix: With reference to your first question, the answer is that it was Geagea who broke his military alliance with Aoun because he accepted the Taif agreement, which was sponsored by the Syrian-American-Saudi alliance. Sorry to burst your bubble but history proves it was your "Christian" leader who allowed for the Syrians to take over the free areas.
As for your second post, I don't understand what you're saying. Muslims contacted LF to attack the Syrians? Are we talking about the same war and country here??

Ya 7abibi ya sa7bi, I think we all know who released Shaker Absi from prison and "gifted" him to Lebanon, ma?

That leaves the Meqdad family. HA is happy to let the army clean the crap that it admitted is out of its control. No favors here either.

The only BS comes from YOU. It's embedded in your name...BSThrower!

OMG....Dr Jekyll and Mr Hyde are amusing each other. Damn what a pathetic Farsi! Try to be 'original'. I know it must be hard. Just reading your posts everyone can see you have a background education of a per-schooler (not even).

pathetic fpmers
amazing how you flip when it suits you :) worse than joumblat!
you have constantly attacked the ISF and have pushed for removing rifi and hassan!
and now you want us to believe you? why?
your hatred to anything that is not you or the syrian regime iran and hizbushaitan is clear to all, and now you want us t believe you?
many fpmers have left your ranks and you know your status for the upcoming elections, and now because hakim refused to even discuss with you, you are going bizerk! :) and you want us to beieve anything you say?
loosers!!!!!

lebanon need to be divided into small electoral districts so the people form those districts are best represented. if i am from the hasbaya area, why do i need to have someone from jizzine sour to represent me. This applies anywhere else in lebanon. The smaller the districts, the better the representation. Hope this will pave the way to making lebanon a federal country- abolish sectarian rule of authority and slowly move out to a modern state.

Actually the current outburst of aoun about the elections is because the discussions at bkirki about this subject came out to the open, and they clearly showed what liars they have been trying to portray geagea and other m14 learders of changing their minds :)
the truth shall set you free, and this applies particularily to fpmers.

I think I found my new cue ball although the old one was much more intelligent.

@FlameThrower
Just re-read your answer and the language you use. Derision is all you know. Shame on you.

Farsi BSThrower....don't your realize that no matter how you manipulate the votes with your aliases...EVERYONE can see that the majority of all the posts are ANTI scum HA! So vote your thumbs as far up as they can reach your derrier (I'm sure you enjoy that) because your schemes only fool your pathetic self. HA will go down.....and that's when the party will start for Lebanon!

@BS It is crazy wahabi obsessed karim_m1 that is manipulating the votes, not FT nor mowaten aka "Brice de Nice".