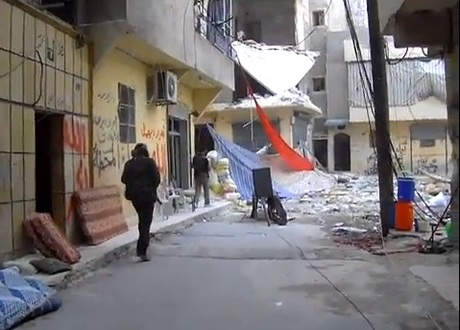 Around 100 people were killed across Syria as fighting raged in a strategic district of Syria's commercial capital Aleppo on Saturday, the third day of a rebel offensive to seize the city, a watchdog said.

The focal point of combat was Salaheddin, a rebel stronghold on the southwest side of the city where insurgents attacked an army position, said the Syrian Observatory for Human Rights.

It also reported that shops in the Aleppo souk, a popular tourist destination before Syria's violence erupted in March 2011, were set ablaze in the clashes between rebels and soldiers.

Fighting also broke out near a military airport in the outskirts of Damascus and a military academy, the Observatory said, as rebels launched an attempt to seize the two complexes.

The army, meanwhile, pounded several districts of the embattled city, including the rebel-held eastern neighborhood of Sakhur and nearby Bab al-Hadid, the watchdog said.

The violence raged after rebels launched on Thursday an all-out campaign to capture the northern city, the scene of some of Syria's fiercest violence since July 20, the Observatory said.

Violence also raged in the capital Damascus as new clashes broke out in the southern district of Assali, the Observatory said.

Meanwhile, the army stepped up operations on the Eastern Ghuta area of Damascus province, shelling several towns near the capital.

The Eastern Ghuta area of the capital and its province is home to some of the rebel Free Syrian Army's fiercest and best organized battalions, including Tajamo Ansar al-Islam.

On Wednesday, two car bombs struck an army headquarters in the heart of Damascus, and Tajamo Ansar al-Islam was the first FSA group to claim responsibility for the operation.

A total of 51 people were killed in violence across the strife-torn country, including 27 civilians and 18 soldiers, said the Observatory, which had reported 136 people dead in violence the previous day.

They Syrian Coordination Committee said that the number of people who were killed in the clashes on Saturday rose to 94 thus far, among them 7 women and 5 children.

Also on Saturday, Assad's forces shelled localities in the southern province of Daraa as well as in Deir Ezzor to the east.

More than 30,000 people have died in 18 months of violence since the outbreak of a revolt against President Bashar Assad, according to the Observatory. The United Nations puts the death toll at 20,000.

There is no way ASSad will stay. He is destroying all that he controlled. He is pursuing a scorched earth policy. If he can't keep it he will destroy all he can before leaving. The eventual new gov't will remember what Hezbcocaine and the Persians helped do.