Ban Urges Syria to Show 'Compassion' to Its People 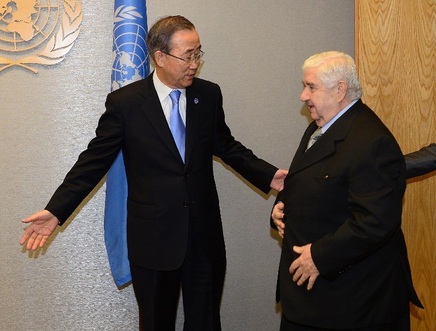 U.N. chief Ban Ki-moon called Monday on the Syrian government to show "compassion" to its people in the midst of an increasingly vicious civil war against armed rebels.

Ban said after a meeting with the Syrian foreign minister at U.N. headquarters in New York that it was time for Damascus to lower the scale of its offensive against the insurgency.

"He stressed that it was the Syrian people who were being killed every day and appealed to the government of Syria to show compassion to its own people," a spokesman for the U.N. secretary general said.

Ban "raised in the strongest terms the continued killings, massive destruction, human rights abuses, and aerial and artillery attacks committed by the government," the spokesman said.

"He expressed deep frustration that, after 19 months of repression and fighting, the situation was still getting worse."

The U.N. chief also said that the growing refugee and humanitarian crisis was spilling into neighboring countries "to an alarming degree."