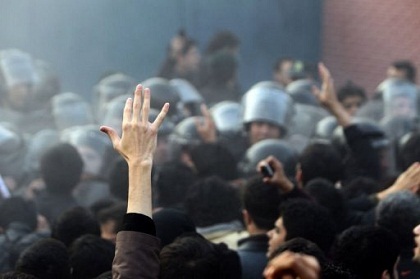 A small group of protesters, most of them women, on Tuesday trashed an Iranian police post protecting the French embassy in Tehran and threw stones at visitors to the mission before being arrested, a diplomat inside told AFP.

"There was no damage to the embassy itself," though the visitors -- all of them Iranians applying for French visas -- had to take refuge inside, he said.

The police post -- a one-man shelter for a uniformed member of Iran's diplomatic police -- had its windows destroyed by stones but remained standing. There was no report of any officer being injured.

The diplomat said the protest happened suddenly, with none of the advance notice given in previous demonstrations. As a result there was no added police presence.

He said the protesters yelled "God is greatest," but he could not discern any other slogan.

He stressed that "it is up to the Iranian authorities to ensure our security."

Just before the French embassy attack, a bigger demonstration was held at the nearby Tehran University in which the crowd shouted "Death to America," "Death to Israel" and "Those who insult the prophet should be executed," according to the Fars news agency.

Demonstrations have taken place in several Muslim countries in the past two weeks over a film made in the United States and cartoons in a French magazine, both of which made fun of Islam's Prophet Mohammed.

Embassy security in Tehran is a sensitive issue.

Britain late last year closed its embassy after it was stormed by protesters during a state-sanctioned demonstration. Canada last month also closed its mission in Tehran, citing concerns for the safety of its diplomats.

In 1979, following Iran's Islamic revolution, students broke into the U.S. embassy in Tehran and took 52 Americans inside hostage for more than a year, leading to a rupture in U.S.-Iran diplomatic ties.