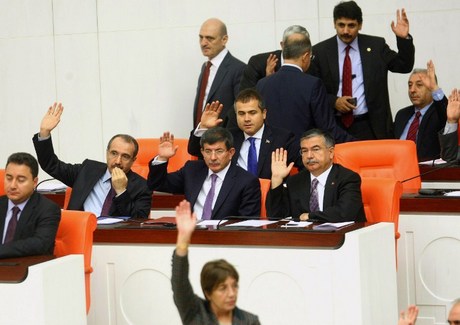 Turkey's parliament on Thursday authorized military action against Syria but insisted it was not a war mandate following deadly cross-border fire that sent tensions soaring.

The vote came as Turkey retaliated for the shelling that killed five Turkish nationals, and Syria apologized and vowed it would not happen again.

Western powers urged restraint, with the United States saying it was outraged and France cautioning that the incident threatened global security.

In Ankara, the Turkish parliament met behind closed doors in an emergency session and agreed to the government's request to authorize military operations inside Syrian territory.

He stressed that the parliament's decision was "not a war mandate", adding however that it would have a deterrent effect.

"Turkey has no interest in a war with Syria. But Turkey is capable of protecting its borders and will retaliate when necessary," Ibrahim Kalin, chief adviser to Prime Minister Recep Tayyip Erdogan, said earlier on Twitter.

The incident prompted a forecast that it could tip events in favor of the rebels fighting to bring down President Bashar Assad's regime.

"The Syrian regime is playing a dangerous game," said Riad Kahwaji, who heads the Dubai-based Institute for Near East and Gulf Military Analysis (INEGMA).

"Turkey can considerably change the balance of power in favour of the rebels, even it doesn't deploy troops into Syria, and limits itself to using its firepower."

Ankara unleashed artillery shells at its neighbor late on Wednesday after mortar fire crashed on to the Turkish border town of Akcakale.

A Turkish mother and her three children were among five civilians killed in Akcakale. As they were buried on Thursday, debris still littered the spot where they died.

The shell smashed through a wall, landing in a courtyard near an olive tree where they had come to prepare their evening meal.

Damascus' close ally Russia said Syria had admitted that the deadly shelling was "a tragic accident".

It marked the first time that Turkish citizens had been killed by Syrian fire since the uprising against Assad's regime began in March 2011.

Several Syrian soldiers were killed as a result of the Turkish riposte, the Syrian Observatory for Human Rights watchdog said, without giving an exact figure.

Turkey had demanded that the U.N. Security Council take action against Damascus over Wednesday's fire, which drew sharp Western condemnation.

U.S. Secretary of State Hillary Clinton said Washington was "outraged", while France said it constituted "a serious threat to global security and peace."

British Foreign Secretary William Hague said the incident was "completely unacceptable not only for Turkey but for the international community as a whole".

Amid the rising tensions, calls for calm poured in.

The European Union condemned Syria but urged restraint on all sides, while Germany called for a "de-escalation", "a measured handling of this worsening situation."

In a crisis meeting late on Wednesday, Turkish Prime Minister Recep Tayyip Erdogan's government drew up a motion asking parliament to allow it to conduct operations inside Syria, like the bombing raids that the army regularly carries out against suspected Kurdish rebel bases in neighboring Iraq.

Akcakale and the surrounding region had come under stray fire from Syria for several weeks as government and rebels battle for a border post, forcing the closure of some 100 schools and prompting the government to advise people to stay away.

Previously the most serious incident between Turkey and Syria was in June, when Syria shot down a Turkish fighter jet that had briefly strayed into its airspace, killing the two crewmen.

Following Wednesday's shelling, NATO member Turkey called an emergency meeting of the alliance and demanded action from the U.N. Security Council over what it called a "heinous" attack.

NATO said that it stood by its member Turkey and urged the Syrian regime to end "flagrant violations of international law" that it described as "a clear and present danger" to an ally.

Syrian Information Minister Omran Zoabi said in a statement reported by state television that Damascus was looking into the origin of the cross-border shelling and offered condolences to the families of the victims.

The minister reiterated his government's charges that it was battling foreign-backed "terrorists" whom it has frequently accused Ankara of training and financing.

Inside Syria, meanwhile, the Syrian army shelled several areas of Aleppo, the country's second city that has been one of the focal points of the conflict since mid-July when the army promised the "mother of all battles" to clear the city of rebels.

More than 31,000 people have been killed since the outbreak in March last year of the revolt against Assad's regime. The uprising began as peaceful protests for reform but morphed into an armed insurgency when demonstrations were brutally crushed.

U.N.-Arab League peace envoy Lakhdar Brahimi is due back in the region this week to try to revive talks aimed at ending the bloodshed, although the U.N. says it is still unclear if he will be able to enter Syria.

Hope pathetic Lebanon learns from this. Bombed you bomb back rather than sit and blame your own country men like Aoun and his March 8th allies do and then come up with some spin.

Syria will do it again. Jordan needs to do the same vote.

How nice to be in a country which has sovereignty. I wish to see the day where the lebanese parliament votes to "retaliate" against syria.... AND to have enough deterrance to be able to retaliate.

no apology for Lebanon? at least a sorry with a BUT at the end

It's an insincere apology as usual--Syria doesn't give a rat's ass about any of its neighbors. Hope the regime fries in hell--almost makes Saddam seem tame by comparison.

same as israel does: kills then apologizes later if the consequences go too far...
but never did lebanon ask for an apology from syria when it shells lebanese villages...

The Syrian army could not have shelled Turkey on purpose, it would be stupid.
Our experience with Syrian gunners have shown their poor marksmanship when they were hitting our homes instead of the fighters on the front lines...

Arzak no need to reply to these conditioned schizo carrying numerous aliases. You can easily see from past posts all they do is bash anyone who comments on their cons. You can't teach religious conditioned fools who live in the stone age to rationalize and/or about reality.

Syria didn't apologize , at least what Reuters reported. Get your facts straight. Syria also didn't promise it will not do same again. Once we will have Turkey apologizing for all the destruction and killings it thugs AKA FSA has done, then it will be different discussion. By the way, watch what is happening in Istanbul, you bunch of looser self haters. In Istanbul huge demos agains QERDOGAN and his policies. And for your info: only 55% of Turkish parlament voted for the GREEN LIGHT to struck inside Syria, if you know what do this mean...

Your name mowaten with the flag is an insult.

I am confused, what does Heeman have to do with it?

Syria Bombed once a Turkish Town and by Error ,less than 24hours after apologized ,25years of occupation slaughter of lebanon and lebanese and they have never apologized .
WHY ??????
Because of the existence of some lebanese ppl such as Hassin ,Michel aoun Mouwaten.
Nizar ,yes i know what you mean,55% is the majority right ?
As for you dummy ,who cares?why do you care about what happens between Syria and Turkey,or Israel and Turkey ??
All we should care about is Lebanon ,and the million apologies owned to us by Bashar el assad for his and his fathers doing in lebanon.
Right Mouwaten???or you do no agree with me?
Please clarify ,i would love to hear your version.

Where do you get the details from regarding 19 people being killed in the flotilla incident? Everyone in the world, except presumably you, know that 9 people died. As for them being "peaceful", belonging to IHH and sailing on the Mave Marmara with the specific goal of trying to break through the UN accepted legal closure of the Gaza Strip, shows that they had sinister intentions.
Why should Israel apologise to the Turkish government when it was that government which allowed the ships with Turkish citizens on board to sail unimpeded from its territory.
The reasonable reason that Turkey didn't declare war on Israel was probably that they realised that they themselves were to blame, and no-one in the world would ever accept the flotilla incident to be a legal reason for declaring war.