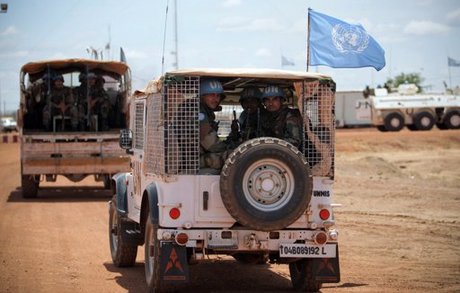 Five people were killed and more than 20 wounded on Monday when rebels shelled the capital of Sudan's South Kordofan state, official radio said, in a rare strike on the government-held town.

"Five people are martyred and 23 wounded because of the SPLM-North shelling of Kadugli," Radio Omdurman reported in an SMS news alert, which gave no source for the information.

Sawarmi Khaled Saad, Sudan's army spokesman, could not confirm the figure and gave a lower toll, telling AFP that one woman died from rebel firing around the capital.

"This morning a group from SPLM-North tried to get inside Kadugli town and they shelled an area six kilometers (four miles) east of Kadugli. As a result of this a woman was killed and three citizens injured," he said, adding that stability has now been restored.

The United Nations and local residents said the town itself had been hit.

Insurgents from the Sudan People's Liberation Movement-North (SPLM-N) admitted the strike but said they do not target civilians.

"Yes, this is our people who have attacked," the rebels' spokesman, Arnu Ngutulu Lodi, told AFP.

"We are not far from Kadugli. We are just on the outskirts of Kadugli."

Lodi had no information on casualties or further details of the attack. He said his forces "are not targeting the people" but the military.

"To our knowledge there were five mortar shells that landed in and around the town," Damian Rance of the U.N.'s Office for the Coordination of Humanitarian Affairs (OCHA) told AFP.

The army has been battling SPLM-N rebels since June last year.

Rance said all U.N. staff in Kadugli, both Sudanese and foreign, were moved "as a precautionary measure" to a base between Kadugli and the local airport.

The base is used by a U.N. peacekeeping mission, UNISFA, which operates in the Abyei region contested by Sudan and South Sudan.

Rance could not say how many U.N. personnel were involved, but the U.N.'s World Food Programme said that 15 Sudanese staff from its office, eight of their family members, and one international employee were taken to the UNISFA base.