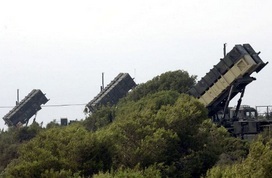 A military spokeswoman confirmed to Agence France Presse that the U.S.-made missiles, which can shoot down drones, had been stationed near Haifa but refused to confirm the move was related to the Saturday infiltration.

A defense official told AFP it was not the first time that the mobile Patriot batteries had been deployed near Haifa.

Israeli fighter jets shot down the unarmed drone over the northern Negev desert on Saturday, after it entered the country's airspace from the Mediterranean Sea near the Gaza Strip.

The army said it did not believe the drone had been launched from Gaza but was looking into the possibility that Hizbullah may have dispatched it, a military official told Israeli public radio.

Patriot missiles, which the United States first sent to Israel during the 1991 Gulf war, were used to defend Haifa during Israel's 2006 conflict with Hizbullah, when the group fired hundreds of rockets from neighboring Lebanon.

The Patriot system is capable of intercepting both aircraft and missiles.