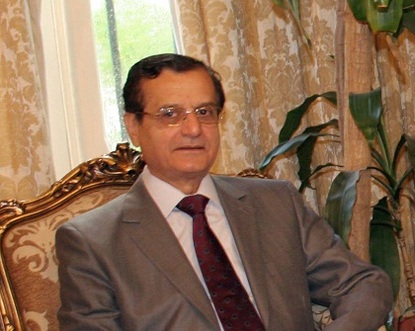 Foreign Minister Adnan Mansour stressed that Lebanon is not violating United Nations Security Council resolution 1701, saying Israel has violated the resolution “tens of thousands of times” since its adoption in 2006.

He told the daily: “Hizbullah's unmanned drone that flew over Israel recently does not violate the resolution.”

“Lebanon will definitely assume responsibility for Hizbullah's recent action because the country in a confrontation with Israel,” he added.

“This is not about Hizbullah, but about an ongoing Israeli violation against Lebanon through its occupation of Lebanese territories,” he remarked.

On the Hizbullah drone, the minister said: “It is as if the party is saying that since Israel is capable of violating the resolution, then so can we.”

“It is time for Israel to halt its provocations,” Mansour declared.

“Israel has no excuse to retaliate to Hizbullah's action because it is constantly practicing aggression against Lebanon,” he explained.

“The United Nations has never held Israel responsible for its violations,” he noted.

His acknowledgment came shortly after Israeli Prime Minister Benjamin Netanyahu pointed at Hizbullah and vowed to defend his country against further "threats."

On October 6, the Israeli air force jets shot down the unarmed drone over southern Israel's Negev desert after it entered the country's airspace from the Mediterranean Sea.

On the Syrian crisis and warnings that it may spread to Lebanon, Mansour said: “We do not need warnings because Lebanon is the most concerned with the crisis due to the historic and geographic ties between the two countries.”

“We are closely monitoring the situation. We are concerned with the security and safety of the region of the whole and not just that of Syria,” stated the foreign minister.

“The developments that have been ongoing in Syria for a year-and-a-half is becoming a threat to neighboring countries,” he added.

“Rockets are bound to land on either side of the border should military operations be taking place nearby,” he noted.

“The army is doing its utmost in protecting the border, but that cannot completely prevent the infiltration of armed groups,” he said.

“Lebanon will definitely assume responsibility for Hizbullah's recent action because the country in a confrontation with Israel,” he added.
The useless Iranian puppet reporting to the Iranian Ministry of Foreign Affairs has spoken. Was anyone aware that the Lebanese army had drones? Why should Lebanon be dragged in another conflict and take responsibility for it because HA wanted to try some Iranian toy.
I still wonder how our image abroad is still represented by such a low class individual.

“Lebanon will definitely assume responsibility for Hizbullah's recent action because the country in a confrontation with Israel,” he added.

Soooooo irresponsible.... how can he speak so lightly?? Syrian mouth piece!

1- You are right. Israel has violated our sovereignty 100s of times. The drone is ok.
2- Now please present your resignation. You are not Lebanon loving. You should represent Syria in the United nations. Please resign and give your position to a Patriot.

So you are saying the Hassan should take Ahmadidjad or whoever he is for Iran--and Aoun should take Moullam's place for Syria. None of them seem to be representing Lebanon at the moment.

Another propaganda account. Filling this forum with your useless ratting

I wish there is a magical way, a miracle maybe, to permanently remove this prick from the face of this planet and at least from a public office where he does not belong... or qualify to run...

Send this clown to Tehran and cleanse the Levant of his type.

doesn t violate 1701? he d better read the terms then speak this moron...even if israel violates the term this is a violation too... oh! yes i forgot about double M8 standards....

Can the minister defend the lebanese if the world pulls out its protection of lebanon under 1701?
We will never witness any courageous stance by the current government members.

A state minister is saying that the Lebanese state is responsible for the actions of a terrorist organization. He just spoke for each and every Lebanese. Mr minister, let your family be responsible, let your sons and daughters hold responsibly and face the warth of war. Let the arms and feet of your grandkids be blown apart. Leave us in peace, you, Hizbullah, Syria, all of you, just leave us, let us seek peace and properity. You bring us nothing but evil and misery.

hope that one day this man stands trial for the incredible harm that he is doing to the country. And I hope that he will be sentenced to the gallows.

Is he a Hezbollah spokesman or a government minister? What a real idiot he is.