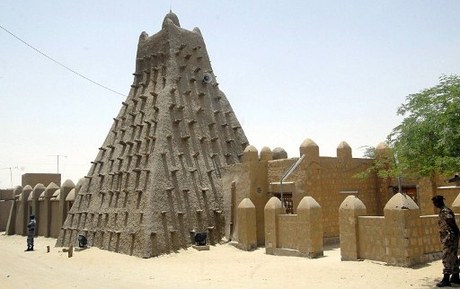 Islamists controlling northern Mali were destroying more Muslim saints' tombs in the ancient city of Timbuktu on Thursday, witnesses said, in the latest attack on the world heritage sites considered blasphemous by the jihadists.

Rebels from the al-Qaida-allied group Ansar Dine (Defenders of the Faith) have drawn international condemnation for waging a campaign of destruction on the city's cultural treasures since seizing it in the wake of a March coup that plunged Mali into chaos.

A resident said the Islamists, some of them armed, had arrived in three vehicles in the southern neighborhood of Kabara and begun destroying one of the area's three ancient tombs.

"They are destroying the first tomb with pickaxes and other tools and saying they are going to destroy all the tombs," another resident said.

Ansar Dine, which controls Timbuktu along with al-Qaida's north African branch, began its campaign of destruction after U.N. cultural organization UNESCO put the fabled city on its list of endangered world heritage sites.

In July, Ansar Dine rebels smashed seven tombs of ancient Muslim saints as well as the "sacred door" to a 15th-century mosque.

The group has also threatened to destroy the city's three ancient mosques, one of which dates back to 1327.

Once considered one of Africa's most stable democracies, Mali has slid into chaos since the March 22 coup overthrew the government of president Amadou Toumani Toure.

Tuareg rebels and a number of Islamist groups including Al-Qaida in the Islamic Maghreb (AQIM) capitalized on the power vacuum in the south to seize the vast desert north, an area larger than France.

But the Islamists then overran the Tuareg and have been imposing their strict version of sharia on areas under their control, arresting unveiled women, stoning an unmarried couple to death, publicly flogging smokers and amputating suspected thieves' limbs, according to residents and rights groups.

The latest destruction came after the U.N. Security Council last week passed a resolution asking West African nations to speed up preparations for an international military intervention to reclaim northern Mali, giving them 45 days to lay out detailed plans.

The Economic Community of West African States (ECOWAS) has said it has 3,000 troops on standby for an intervention in the north.

"There must be an urgent intervention of Western forces," Elhadj Baba Haidara, the head of a group representing elected officials in the north, told journalists in Paris, warning that delays were giving the Islamists time to consolidate their hold on the region.

"They have ways of indoctrinating the population, with fear, with conviction, with force or with money," said Haidara, the elected deputy for Timbuktu.

But plans for an intervention remain divisive in Mali, which has been deeply fractured since the coup.

Some 2,000 people took to the streets in the Malian capital Thursday to protest plans for a foreign intervention.

But the march, organized to support Mali's own army and protest the ECOWAS plan, failed to match the numbers of a pro-intervention march a week ago, which drew some 10,000 people.

The destruction of endangered world heritage sites in Timbuktu has provoked widespread outcry, uniting countries as disparate as the United States and Russia in their condemnation.

International Criminal Court prosecutor Fatou Bensouda has labeled it a war crime and threatened to prosecute those responsible.

Known as the "City of 333 Saints", Timbuktu was founded between the fifth and 11th centuries and became a crossroads between north, south and west Africa and a melting pot of black Africans, Berber, Arab and Tuareg.

Once a key center of Islamic learning, the trade in gold, salt, ivory and books made it the richest region in west Africa, attracting scholars, engineers and architects from across the continent and making it a major center of Islamic culture by the 14th century.

Today a dusty outpost synonymous with exotic remoteness in the Western imagination, it has been a world heritage site since 1998.

If Islam teaches Peace, its students are failing!

All other cultures and civilization must perish, for the defenders of the Muslim Faith to be cured from the chronic inferiority complex.