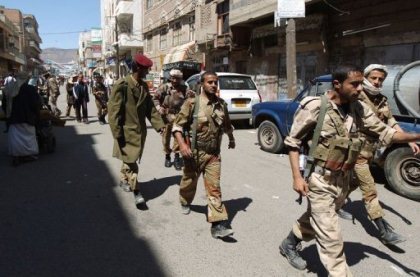 Al-Qaida militants set off an explosives-laden car inside an army base in southern Yemen at dawn on Friday, killing at least 14 soldiers, military officials said.

The militants drove through several checkpoints before entering the base of the Yemeni army's 115th brigade in Abyan province, where a drone raid killed at least seven Al-Qaida members the day before, one official told AFP.

"Four members of Al-Qaida with explosive belts... traveling in a military vehicle managed to pass through several army checkpoints to reach the camp" at Shaqra, 35 kilometers (22 miles) from the Abyan capital Zinjibar, another said.

"Two soldiers were killed at the entrance of the base by the assailants who then continued their journey to the camp where three of the four occupants got out of their vehicle, while the driver blew himself up," said the official.

In all 14 soldiers were killed and 10 others wounded.

The army killed two of the militants who got out of the vehicle, while a third one managed to escape on foot, officials said, adding that a manhunt was underway.

The attack came 24 hours after rockets fired from a drone near the southern city of Jaar killed at least seven suspected members of the terror network, including a local leader, an official in the restive region said.

Officials say Al-Qaida militants have been trying to position themselves near Yemen's main southern cities to carry out operations against the army and the Popular Resistance Committees, local pro-army militias.

In May, the army launched an all out offensive against Al-Qaida in Abyan province, forcing them to retreat from major strongholds including Jaar and Abyan's capital Zinjibar.

The campaign was backed by U.S. drones which in recent months have been deployed in strikes against Al-Qaida targets in the south and east of the country.

Thursday's strike was the second such drone since October 4 when two cars carrying suspected Al-Qaida gunmen in the southern province of Shabwa were hit, killing five militants.

Al-Qaida took advantage of the weakness of Yemen's central government in an uprising last year against now ousted president Ali Abdullah Saleh, seizing large swathes of territory across the south.

But after the month-long offensive, most militants fled to the more lawless desert regions of the east.

Though weakened, the militants still launch hit-and-run attacks on government and civilian targets throughout the country.