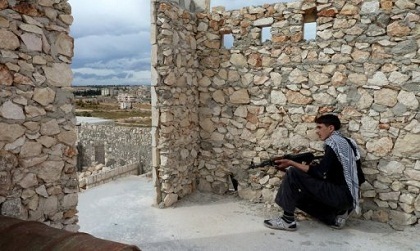 Syria's air force carried out raids on Friday morning against rebels besieging a major military base in the northwestern province of Idlib, said the Syrian Observatory for Human Rights.

"Military aircraft dropped bombs that targeted rebels camped near (the base at) Wadi Deif," concentrating their firepower on the villages of Talmans and Maashemsha, said the Britain-based monitoring group.

The insurgents have launched what they call a "final assault" against the strategic military camp of Wadi Deif where about 250 soldiers have been holed up for days. The base also houses tanks and fuel.

The battle for the base has killed at least six soldiers, according to the Observatory, which said that the facility has been surrounded by around 2,500 rebel fighters.

To the west of the base, regime warplanes battered a residential area of the rebel-held town of Maaret al-Numan on Thursday, killing at least 49 people, almost half of them children, rescuers told an AFP correspondent at the scene.

The air strikes destroyed two housing complexes and a mosque, where many women and children had been taking refuge, in the strategic northwestern town. Among those killed was a nine-month-old baby.

Violence across Syria killed 168 people on Thursday -- 70 civilians, 61 soldiers and 37 rebels, said the Observatory, which relies on a network of activists, medics and lawyers for its information.

It says more than 34,000 people have been killed in Syria since the outbreak of an uprising against the regime of President Bashar Assad in March last year.

you look like a demented fanatic ... so don t blame the fsa as you look just like those you criticize, not better even worse if you take time to read your BS....

lol! you are so funny mowaten! i bet you d accept "free" elections under the threat of bombs! i bet you if your familiy was massacred by the regime it would engage you to go and vote peacefully for elections! you are soooo blinded by your faithful loyalty to those that have harmed lebanon more than israel... a true patriot indeed....

in any civilised country an army doesn t bomb its own citizens... it s against all international laws... except if you think that syria s enemies are its people not israel! you are soooo comic.

you believe that people being butchered would respond by doing nothing! you are heroic! waw!

so i guess in bahrein people don t have the right to demonstrate too... or do double standards apply there? lol!

live in oblivion.. they were few defectors at first, now they control more than 60 percent of Syria, these are military facts idiot. Idiots like you used to say Aleppo and Damascus were out of touch and pro regime right? well look at those two cities now idiot, and just imagine where the rebels will be come next summer. Keep living in denial. Go read about najibula of afghanistan, he too was supported by the USSR and after ten years of rebelion and 1 million casualty the rebels hanged him. The point being time is not on the regime's side, just think of the events from march 2011 and you would figure it out, that is of course if they allow you to think.

eh mowaten, in ba7rain all peaceful, and in syria was all peaceful until ramadan of last year, you probably refuse to see the million people in the streets of 7ama and deir zoor ramadan 2011, to you these are 3rd class sunis that deserve to die just like wesam 7asan mahek?? it is a matter of time before these rebels come to lebanon to take their revenge because of blind racist idiots like you.

tfeh 3alak and on low life people like you, may you burn in hell.