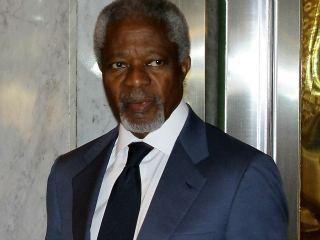 "When you look at the results of Calderon's efforts, most people will tell you it has not worked. He's got lots of people killed," Annan said at the Brookings Institution in Washington.

"There is need for change in policy, but it has to start with a debate and discussion because there are very strong emotions on either side," Annan said.

Annan served last year on a global commission headed by former Brazilian president Fernando Henrique Cardoso that recommended decriminalization of drugs. He reiterated Thursday that drug laws "have not worked."

"We have applied them (the laws) for decades. It's got the prisons filled with lots of young people who sometimes come out destroyed for having an ounce, or whatever," he said.

"We should approach it through education, health issues, rather than a brutal reaction," he said.

Annan also called more attention to curbing demand for drugs -- which in Mexico's case comes largely from the United States -- rather than just cutting down on supply.

Some 60,000 people are estimated to have died in Mexico's vicious drug war since the military launched a crackdown in 2006.

In a major blow to drug traffickers, Mexican authorities announced this month that they killed Heriberto Lazcano, the leader of the Zetas cartel and Mexico's second-most wanted man.

But authorities were quickly embarrassed afterward after the body of the man known as "El Lazca" was stolen from a funeral parlor.

Annan, who led the United Nations for an often turbulent 10 years starting in 1997, was visiting Washington as he promotes his memoir, "Interventions: A Life in War and Peace."