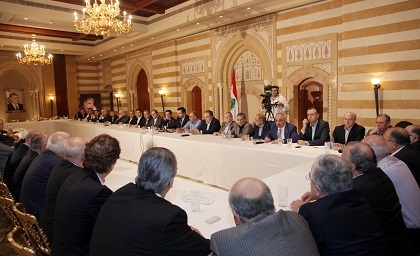 It said in a statement after an extraordinary meeting in the wake of the assassination: “The government holds the political and moral accountability for the plan to target Lebanon's stability.”

“We therefore demand the resignation of the government and its prime minister immediately,” it said.

“Its staying in power represents the protection of the criminals,” it continued.

“Hasan's assassination cannot be separated from that of slain Premier Rafik Hariri and all the March 14 martyrs,” they noted.

They therefore said that handing over the accused in Hariri's murder to the Lebanese state, which will in turn hand them over to the Special Tribunal for Lebanon is the means “to save national partnership and pave the way for a new national phase in Lebanon capable of confronting assassinations.”

Moreover, they said that Hasan's assassination is “an announcement by the forces of terror that they will pursue the mission they kicked off with Hariri's murder” on February 14, 2005.

“Hasan's murder was committed by the regime of (Syrian President) Bashar Assad, his regional allies, and local tools,” said the March 14 statement.

“The Lebanese people will not succumb to the series of terrorist and organized political crime,” it declared.

“We look forward to the efforts of all Lebanese people to confront these plans and … and call on them to be prepared for the steps that will be aimed at rectifying the situation in the country,” it stressed.

Hasan was killed on Friday in a car bomb in the Ashrafiyeh district in Beirut.

Conflicting reports emerged over the number of dead in the blast with some sides putting the figure at three and others at eight.

At least a hundred people were wounded in the explosion.

Walid bayk. Resign from the gov and topple it.

Non-violent demonstrations should continue to escalate until Miqati resigns. This current government provides political cover for the murderous Assad regime and the equally criminal Iranian tools. Meanwhile, the pathetic coward ex-general made this all possible by siding with the axis of evil.

The UN needs to include this crime as part of the STL, as no crime commited against anti-Syrian figures will ever be solved in Lebanon, since the lunatics are in charge of the asylum.

the least mikati should do is to quit otherwise he would be covering for the murdors of his cabinet friends and the syrian regime.

a bit of self respect FT goes a long way...but hey, if your leaders have none, we dont expect you to have any/

We are ready to return to Lebanon and join your battle to free this nation from the ayatollahs and assad curse once and for all. M14 must wake up before its too late. There are thousands of lebanese around the world who are ready for the liberation. The liberation from evil and from tyranny and injustice. The gun must be carried, the time for nice words is over. M14 will not have many members left if they don't fight the enemy within. Hozbshaytan, the greatest cancer for lebanon.

who hates them most? the syrians and your M8 friends... they are morally accomplices and you with them...
i bet you are happy to be allied with people who kill civilians like in syria... yeeehaaa! another filthy M14 is down! that is what you sing in your fpm meetings i bet!

So this whole thing was to get Miqati to resign? Now it makes sense.

And reading the posts above, it seems so many are playing right into it.

MIqati SHOULD NOT RESIGN. we have to leran working together and forget about egos. our problems are bigger than " you go, I can do it better" . So shut it up and work together.

Ain't that the truth, the whole truth and nothing but the truth...

March 14, please clarify, if you please: are these accusations in the line of past "political accusations of assassinations" or this time you gyus and dolls finally solved the mystery? Too bad those who supposedly are security big mommas can't even solve one mystery, let alone protect themselves! They were such big mommas, indeed.

M14 under the leadership of the child king skiing tweeting saad have lost their moral authority over the country. Today Suleiman and Mikati represent Lebanese interests better than those M14 m3afnin or those M8 zo3ran. I hope Mikati doesnt listen to them.

funny but isn t mikati at the head of a cabinet which majority is made of M8 zo3an as you say? your comment in not logic at all....