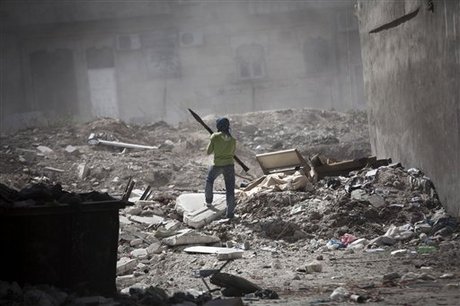 Syrian warplanes resumed bombarding the key northwestern town of Maaret al-Numan on Saturday, as clashes erupted on a nearby highway and an explosion rocked a town in Damascus province, a watchdog said.

The warplanes pounded Maaret al-Numan as they have daily since it was overrun by rebels on October 9, the Syrian Observatory for Human Rights said.

One rebel was killed in fighting after insurgents attacked a military convoy on the highway south of Maaret al-Numan, which connects the northern city of Aleppo with Damascus, the Observatory said.

The military wants to regain control of the highway to resupply units under fire in Aleppo for the past three months and assist 250 troops besieged in their Wadi Deif base.

On Friday, fighters there accused the regime of using cluster bombs in the attack, echoing claims by a rights group.

Rebels showed AFP debris from cluster bombs they accused the air force of dropping on residential areas, as well as dozens of others that failed to explode on impact.

Human Rights Watch has accused Syria of using cluster bombs, a charge denied by the military, which insists it does not possess them.

In Damascus province, plumes of smoke could be seen rising from the town of Harasta after a powerful explosion rocked it, followed by shelling that killed two civilians killed, the Observatory said.

Government forces arrested 20 people in Harasta, 10 kilometers (six miles) northeast of Damascus, while fierce fighting broke out in the nearby town of Irbin, the Britain-based watchdog said.

The latest violence comes a day after 133 people were killed nationwide, including 55 civilians, 45 soldiers and 33 rebels, according to the Observatory.

Now the Syrian goverenment tastes it's owen mediceine on it's turf. They have intervened in Lebanon civil war, killing all Lebanese that did not bow to her tyranny and dommenance. They depleated all Lebansese resources and stole everything thay could. They even killed their owen leaders starting by Ghazi Kennan and God knows how many others. God willing, the killing regieme will not last too long, Bashar, you will join Gadafi, Mubarak and Saddam soon. Have a nice trip to hell.