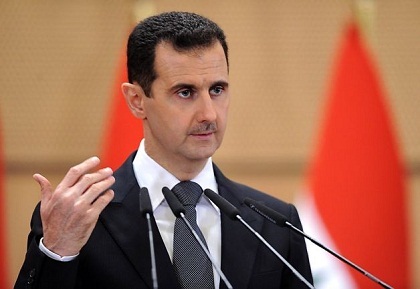 President Bashar Assad issued an amnesty for all crimes committed in Syria "up until today," with the notable exception of "terrorist crimes," state television said on Tuesday.

Assad, who has been fighting a 19-month revolt against his regime, "decreed a general amnesty for crimes committed before October 23," except for those carried out by "terrorists" -- the regime's term for rebels.

The decree applies only to criminals who surrender to the authorities and not those on the run, the report said. It was not immediately clear if the amnesty includes those in prison.

desperate times call for stupid measures--seriously, you have to surrender first.

mowaten, now you do sound like a paranoid illiterate...

Allouch.....Farsi Motormouth aka BSThrower is not only a paranoid illiterate but a naive conditioned fool. Every one of his posts are defending Iranian linked criminals that are killing/torturing/assassinating innocent civilians claiming to be backing his words with facts. We all have seen his facts that comes straight from atypical HA village idiot want-to-be preachers. He will not change and mind hopelessly limited (a prime catch for HA).

Schizo Farsi I'm simply responding to a well known annoying loser on this blog. We all know your usual games through your alias BSThrower and won't accept your bashing of true Lebanese who support freedom and peace unlike your naive/conditioned support of the axis of evil aka HA/IRAN/ASSAD! So as long as the sewage spews from your end, we will remind you time after time that it's all sewage!

bigsami, I agree that this pathetic mowaten of Syria is so obviously in love and adoration of the Farsi Nousralla and all things Orange. He is so anti-Lebanese and democracy that he's a lost cause and on top of that he's obviously on speed and cocaine...

so you are thinking that everyone going to surrender is going to be the yaseen (from ghawar) types--anyhow, no one can trust this regime. Many of the same people that were working for his father are working for him now and they tortured,killed, and jailed ten of thousands of lebanese on trumped up charges.

He is a fool for proposing that--the bigger fools are the ones who believe him.

mowaten--deserters are one thing and in civilized countries, they have such a thing called being conscientious objector. They actually believe that the army bombing its own civilians indiscriminately is morally wrong, of course, people like you who support the regime without question and its iranian and hizb mercenaries wouldn't know anything about morality.

I used to think you were a tool--but I know you now to be a fool.

FSA?? did FSA also kill hariri, jubran, 3eedo and all the others?? did FSA even exist back in 2005?? "desperate move" lol, who is desperate genius?! the regime or the revolution?! just do simple math, who is stronger today compares to a year ago, what have you been smoking? go read Aoun's remarks and death threats to al-7asan, the problem in lebanon is the arrogance/racism/stupidity of people like you and their complete disregard to other people. This will eventualy lead to the destruction of the country. Yes you are right about one thing, sooner or later jihadis will start pouring into this country thanks to your assasinations of any moderate voice and your politicians will start to die too.

Mowaten i really dont have a problem with you hating saudi arabia as you were probable bred to do so. But why do she3a lebanese (as well as so many aounis) still work/live in saudi arabia, UAE, Qatar etc. why do so if they hate it so much?? 3anjad, why play around the Bush, you are sectarian to the teeth and therefore be honest. Do you see suni arabs working in Iran?? Ye3ni how the f do you think anyway? and how much hypocrisy do you guys have?

And save your breath the revolution in Syria will win ghasben 3an rasak and you will disappear off this screen on that day, you can live in oblivion all you want and it will not change the facts on the ground. The future is not for persian iran no more in the arab land because yes it is a fight between muslim arabs and persian iran, and the day that the she3a arabs wake up is not too far.

Oh yeah great. you are so kind bashar. this is ridiculous.

Is this guy living LALA land?

This retard is a joke... Extending amnesty to his executioners... he must suffer from mental disease his pal Aoun suffers from...

ft, are you comparing the butcher Assad to Jesus? unbelievable...

This is coming from the biggest terrorist himself.

ASSad the retard opens his hole again. If people are not "terrorists" why do they need amnesty?

I have a deal for you Bashar......get out alive while you still can, otherwise remember Qaddafi.

here we go again with are two marvellous defenders of the syrian regime: more baathists than the real ones! and they pretend to be democrats? lol what a farce...
but funny to see how desperate they are to save bashar and thus pay tribute to all its victims in lebanon because of him: they call them selves patriots LOL!
they just kill the innocent fallen ones a second time...

DID FT JUST COMPARE BASHAR TO JESUS CHRIST??? LOL i swear each time i open up naharnet comments i make sure the popcorn bowl is full n ready.

If the quagmire that Bashar finds himself in is what you call winning then hani2an ilak wa ilo...

Its amazingly obvious that both Mowatin and Ft appear on most of the posts at the same time loooooool they must be twin sisters of the orangotang network of nitwits! they got kiced out of that site for being too gay for them. loooool

It is you assad who will ask for amnesty from the syrian people and will not be granted and from god and he will send you straight to hell.

after reading most comments here i get convinced even more that our people have one solution to end all the mental challenge we face. i dont understand how "flame thrower" and "Mouwaten" and many more support a leader that commits genocides on his people. oh yea they are hizb supporters. anyways those born to follow like cattle will never learn to think for themselves. i am not with either political side in leb just so no one accuses me of being biased but i also am not stupid enough to believe BS when i hear it. one solution to end this all. el sha3b el 3arabe needs to be wiped out. we are an embarrassment to humanity and we dont deserve el ne3meh. we never learn from our mistakes and we tend to believe ourselves superior to the rest of the world. we need to drop dead coz we are a waste of space and oxygen.

You are all the cancer of our society.bunch of morons

the people ?? on his side ?? seriously ? so you are telling me that over 20000 dead are all fighters from the rest of the arab world? please stop being blind and open your eyes i cant believe you can be that blind . who is telling you all that ? the 3alawites of syria (AKA those who control the country?) or the hezb ?? those who support the genocide of innocent civilians ?? those fighters only started coming recently , but 65% of the genocides committed contain women and children ! are those the fighters you were talking about ? it makes me sad to see how ignorant arabs can be.

and to those who argue between iran and saudi and which being evil and which is good , well both are worse than each other but ksa is the lesser of both evils because they actually invest money in lebanon and not like iran which only supplies weapons to one sect so they can create an unstable lebanon so yes. iran is the satanic birthplace of the devil.. i cant argue anymore coz now i want to choke u all with my bare hands (except the open minded).

We're a group of volunteers and starting a new scheme in our community. Your site offered us with valuable info to work on. You have done an impressive job and our whole community will be grateful to you.