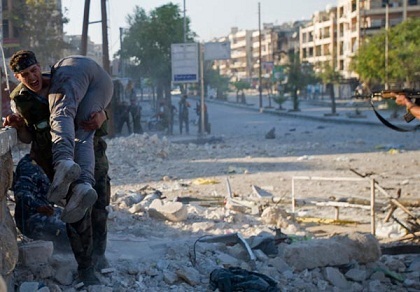 The U.N.-Arab League envoy has proposed a ceasefire for the Muslim holidays of Eid al-Adha which start on Friday but without securing any firm commitment from the government or rebels who have been locked in conflict for the past 19 months.

The hoped-for halt in fighting that has killed an estimated 34,000 people and which is now costing around 100 lives a day aims to clear the way for a political dialogue to resolve the conflict.

On the ground, the air force carried out fresh strikes on Maaret al-Numan where the two sides are battling for control of a key military base and a stretch of the highway linking Damascus and Aleppo, the country's second city.

The Syrian Observatory for Human Rights said the rebel Free Syrian Army and Al-Nusra Front, an Islamist group, were leading the assault on Wadi Deif base near the town in the northwestern province of Idlib.

Five members of the same family, including a woman and a child, were killed in an air strike on Maaret Shamirin village in the province, according to the Britain-based Observatory.

It said air raids further south targeted Irbin and Harasta, in the suburbs of the capital Damascus, where four rebels were killed in clashes.

Five more civilians died in shootings and bombardment of Harasta and 20 were wounded in shelling as regime forces tried to wrest back control, the monitoring group said, adding that several districts of Aleppo also came under air strikes.

A total of 164 people were killed in nationwide violence on Tuesday, including 89 civilians, 34 rebels and 41 soldiers, the Observatory said.

In Moscow, Russia's top general said on Wednesday that the rebels had secured shoulder-launched missile systems capable of shooting down aircraft, including Stingers made by the United States.

"We have information that the rebels fighting the Syrian army have shoulder-launched surface-to-air missiles of several states, including Stingers," General Nikolai Makarov said, quoted by Interfax news agency.

On the diplomatic front, United Nations spokesman Martin Nesirky said Brahimi was pressing hard for a truce and would brief the divided Security Council on his efforts on Wednesday.

"It remains to be seen what will happen" about the ceasefire, said Nesirky. "Mr Brahimi is pushing extremely hard as is the secretary general because this is an extremely important moment."

He said the envoy wanted "a long-lasting ceasefire that will enable a political process to unfold."

The 15-member Security Council is bitterly divided over the conflict, with Western nations pressing for international actions against the regime of President Bashar Assad while Russia and China have been blocking these moves.

Damascus has said Brahimi's visit was "successful" although there was no concrete outcome. The Arab League, however, has dampened hopes of a truce, saying the chances of it coming into effect were "slim."