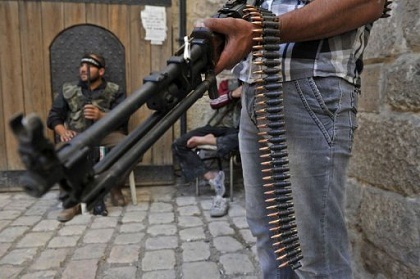 U.N.-Arab League envoy Lakhdar Brahimi's ceasefire plan to stop fighting in Syria has been a failure, a rebel commander said on Saturday, after almost 150 people reportedly died on the first day of the truce.

"This is a failure for Brahimi. This initiative was dead before it started," Abdel Jabbar al-Okaidi, the head of the Free Syrian Army (FSA) military council in the northern city of Aleppo, told Agence France Presse by telephone.

He insisted the FSA had not broken the ceasefire and was only carrying out defensive actions.

"I was on several fronts yesterday and the army did not stop shelling," Okaidi said. "Our mission is to defend the people, it is not us who are attacking."

He said the ceasefire had been doomed from the start and that the international community needed to stop putting faith in President Bashar Assad's regime.

"The Syrian people have become guinea pigs, every time there is an envoy who tries an initiative, while we know the regime will not respect it.

"We accepted the ceasefire for the international community, to not give an alibi to Russia and to China" to claim the rebels were cooperating, he said.

Assad's forces and the FSA had both agreed to a call by Brahimi to lay down their arms for the four-day Eid, but both also reserved the right to respond to attacks.

The Syrian Observatory for Human Rights said at least 146 people were killed in bombings, artillery fire and fighting on the first day of the truce on Friday.