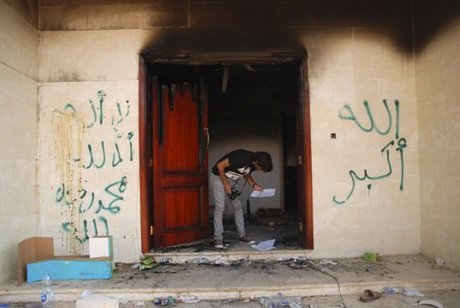 The U.S. mission in Benghazi that came under attack by militants on September 11 was mainly a secret CIA operation, the Wall Street Journal reported Friday, shedding new light on the deadly assault.

President Barack Obama's administration has faced a storm of pre-election questions about why there was not more security at the U.S. consulate where four Americans, including Ambassador Chris Stevens, were killed on September 11.

The Wall Street Journal said the mission was mainly a CIA operation, adding that of the 30 American officials evacuated from Benghazi following the assault, just seven worked for the State Department.

It also identified the two security contractors killed in the attack -- former Navy SEALs Tyrone Woods and Glen Doherty -- as working for the Central Intelligence Agency and not the State Department.

In a break from tradition, it said CIA Director David Petraeus did not attend the ceremony when the coffins arrived back on American soil in order to conceal the CIA operation in eastern Libya.

It said the nearly two dozen CIA operatives secretly worked out of a separate building known as the "annex," where officials at the consulate had retreated following the initial attack before coming under fire again.

The operation, which hit the ground shortly after the start of the February 2011 revolt that overthrew Libyan dictator Moammar Gadhafi -- was aimed at counterterrorism and securing heavy weapons held by the embattled regime.

The Journal suggested that the security lapse may have been due to miscommunication between the CIA and the State Department, with the latter assuming the annex security team was a sufficient backup for its own guards.

"They were the cavalry," it quoted a senior U.S. official as saying.

The Journal said that the day after the attack, the CIA sent Libyan security officials to the annex to destroy classified documents and sensitive equipment while leaving the charred and ransacked consulate -- which by design had contained no classified materials -- unattended.

How shocking IF TRUE. March 14, would you say it's true or just a fabrication by the forces of backwardness and Wilayat al-Faqih nonsense and voodoo powers? OMG! These evil folks never see the good but always the minuscule harmless bad. I'm sure that most of you know that it's because these forces of evil are baaaaad, very baaaaad, and killers and invaders from the land of Farsis and who knows where else! Who wants to live with people that baaaaad, March 14? I cannot wait for the day when you will clean up the land of cedars from all the baaaaadness! March 14, you are our only hope for a clean and "Lebanon First" type of Lebanon, with no Palestinian and no Pales-Syrian problems either. With you, warriors, we can make sure that bad history will not repeat itself. God bless you and save us from collective amnesia!

Yeah sure....Obama desperately looking to save his reputation & credibility!

schizo Farsi commending yourself? LMAO! Who are you today...Dr Jakoff or Mr Hyde......