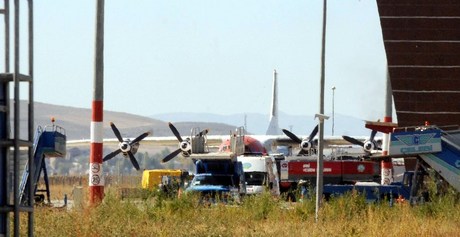 An Armenian plane carrying humanitarian aid for Syria was forced to land in Turkey on Thursday for an inspection of its cargo, the Anatolia news agency reported.

The cargo plane landed at Erzurum airport in eastern Turkey where teams of police and troops with sniffer dogs began their searches, it said.

The plane was allowed to take off for Syria after nothing suspect was found aboard, NTV television reported.

The Armenian foreign ministry said the landing was planned.

It was the second time in a month that the Turkish authorities have ordered an Armenian plane heading for Syria to land for security checks.

On October 15, another Armenian plane carrying humanitarian aid to Syria's battered second city of Aleppo was forced to land at Erzurum airport but the plane was allowed to resume journey after officials said no suspect cargo turned up during searches.

Last month, Turkish jets forced a Syrian plane flying from Russia to land at Ankara airport because of what it called suspect cargo.

Turkish Prime Minister Recep Tayyip Erdogan said the cargo contained military equipment for the Syrian defense ministry, but Russia said it was dual-purpose radar equipment which was not banned by international conventions.

the only cargo planes still going to syria are the iranian and the armenians.
N.B.the hungarians and the russians stopped a while ago.i mean CARGO planes.

It is well within their international rights to refuse overfly to planes which they believe may be transporting illegal materials.
So for once I agree with the Turks.

they don't believe these planes are transporting illegal materials, it's all just for show (they think it makes them look macho) ... in both cases they had agreed beforehand with the Armenian government for the planes to land ... the wording in this article is misleading to say the least.

what christian terrorists are you talking about ? the Armenians have never terrorized anything in Syria ! this isn't an Armenian war you idiot ,its your fellow sunni groups fighting the Alawis ,and fyi if Armenians wanted to smuggle weapons into Syria for any purpose your Erdogan and you wouldnt even know about it .

The only true Turks are the secular (atheist better) who reject the evil teachings that Erdogan ascribes to. The man is a dirt bag Islamist who see's himself as a Caliph of the growing Ummah. He is a criminal and a terrorist lover. The Armenian have a right to defend themselves against these bearded smelly Neanderthals who wear the black headband that Al Qaiada uses as their flag.