Bangladesh Arrests 2,500 over Clashes with Police 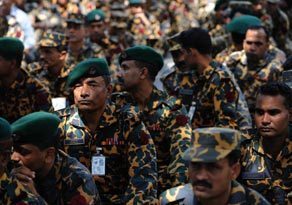 The arrests came after nearly 200 policemen were injured in attacks by members of the Jamaat-e-Islami party and its student wing during nationwide protests against the trial of party leaders for war crimes.

Home Minister Mohiuddin Khan Alamgir told reporters on Tuesday that some 350 of those arrested would be tried in a fast-track tribunal.

"The state has initiated all sorts of measures to stop Jamaat. At least 2,500 miscreants have been arrested," Alamgir said.

Jamaat said its activists had been arrested over false charges.

The government started trials of Jamaat leaders in November 2011 on charges of war crimes during the 1971 liberation struggle.

Jamaat has dismissed the court action as a government "show trial", while the New York-based group Human Rights Watch has said the court's legal procedures fall short of international standards.

The current government says up to three million people were killed in the 1971 war, many murdered by locals collaborating with Pakistani forces.