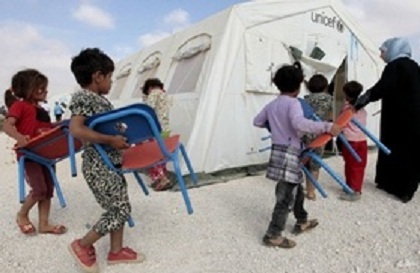 A stray bullet fired from inside Syria wounded a Jordanian soldier on the border on Friday, prompting the kingdom's army to respond to the source of fire, an armed forces spokesman said.

"The border area in Tel Shehab has in the past few hours witnessed heavy fighting between the Syrian (regime) army and the Free Syrian Army," he said in a statement carried by the state-run Petra news agency.

Momani was taken to hospital "and now he is in good condition."

"Jordan's armed forces have been exercising self-restraint despite indiscriminate fire from unknown sources inside Syria," the spokesman added.

"This time, however, and in an act of self-defense, the army used a suitable response to the source of fire. The army will not hesitate in the future to take all necessary measures to defend Jordanian territory and border."

"What happened was not a clash between Jordan and Syria. It was between the Syrians themselves, and it was very vicious," he told AFP.

"Militarily, we in Jordan do not give this incident big importance. We do not want to blow it out of proportion, although it is the first time Jordan has made such an announcement."

A Syrian child refugee was killed by Syrian regime fire as he and his family tried to enter Jordan in July, and a Jordanian soldier was wounded as he tried to help them cross the border.

Hundreds of Syrians cross the border daily into Jordan, fleeing the fighting between President Bashar Assad's forces and rebels.

"The kingdom maintains its position and it will not interfere in Syrian affairs. But Jordan will protect its border, territory and people," Maayatah said.