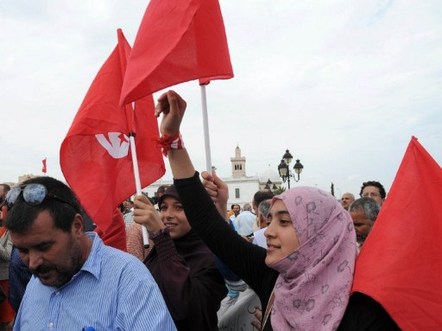 Tunisia's main labor union has won key support for a rare nationwide general strike to be held next week from the International Trade Union Confederation, a local ITUC official said on Sunday.

ITUC secretary general Sharan Burrow will arrive in Tunis on Tuesday at the head of a delegation "to express her support for the UGTT general strike that will be observed on December 13," ITUC spokesman in Tunisia Ghassen Ksibi said.

The ITUC represents 175 million workers in 153 countries and has 308 national affiliates, of which the UGTT which has a membership of more than 500,000.

The UGTT called next week's strike amid tensions with the ruling Islamist Ennahda party following what the union said was an attack by Ennahda supporters on a UGTT demonstration in Tunis.

A union leader told AFP the UGTT demands the dissolution of the pro-Ennahda League for the Protection of the Revolution, which it accuses of carrying out last week's attack.

Burrow "will express her support for the UGTT's decision calling for a general strike" and its backing for the union "following the attacks it has faced," Ksibi said.

The December 13 general strike is to be held on the eve of the second anniversary of the revolution that ousted former dictator Zine El Abidine Ben Ali, amid rising social and economic tensions in the country.

Many Tunisians feel bitterly disappointed by the failure of the revolution to improve their lives, especially in the marginalized interior which suffers from a chronic lack of development and high unemployment.

Clashes, strikes and attacks, including by hardline Islamists, have multiplied across Tunisia.

The nationwide strike call is only the third to be made by the powerful UGTT since its foundation in the 1940s.