Damascus: Failure to Hand over Hariri, Saqr, Meqdad is Violation of International Law 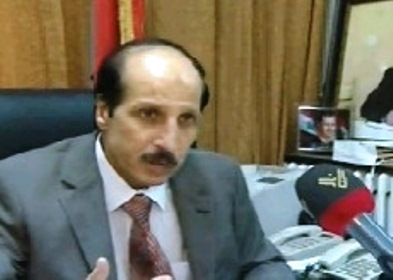 “They are involved in crimes of terrorism and therefore considered to be terrorists who can be captured by international criminal law,” he told SANA.

Interpol's office at the Internal Security Forces received on Tuesday from Syrian authorities arrest warrants against Hariri, Saqr, and Meqdad.

They were charged with the crime of arming the Free Syrian Army.

A security source later told Agence France Presse however that the Interpol has nothing to do with the arrest warrants.

Loji revealed that the warrants were issued in light of the airing of audiotapes revealing Saqr's contact with Meqdad and other Syrian rebels and their striking of an arms deal.

He added that the Lebanese authorities should have immediately lifted Saqr's immunity as soon as the recordings were broadcast.

“Charges will be filed against anyone found to be involved in the terrorist activity in Syria,” he stressed.

The warrants come in light of requests by the Lebanese judiciary to question Syrian security chief Ali Mamlouk, a colonel identified only as Adnan as suspects in the case of former Minister Michel Samaha and Buthaina Shaaban, Syrian President Bashar Assad's media adviser, to be questioned as a witness in the case.

OTV and al-Akhbar newspaper recently revealed that Saqr had been carrying out arms deals with Syrian opposition members, with the television station airing leaked recordings of conversations between the lawmaker and Meqdad.

Saqr said in a statement on Tuesday that the arrest warrants prove that the Assad regime “forged the recordings.”

He previously accused OTV and al-Akhbar of tampering with the audiotapes and saying that he will file a lawsuit against them.

Does anyone else here see that Al-Manar is in this pic too? Hmmm...

Syria killed Hariri's father, Syria is dropping barrel bombs on civilians, Syria has Lebanese in jail for 30 years who did nothing, Syria loaded Samaha with bombs and sent him to Lebanon to kill.......all violations of international law.

so that leaves hezbollah....:)

According to the article, he did not say that Syria did not do it. He said he was wrong to accuse Syria.

yes we all know that you and mowaten are the two best investigators on this site and you resolved everything, LOL!

Why doesn't Syria put Muallem in front of a camera and show a video again? Was that "evidence" too?

do these idiots think anyone is taking them seriously? at least they are entertaining. you have to give them that.

You gotta give it to these people, even when headed to the mashan'a, they are giving orders!

Thanks for the shout out the other day bro...I don't comment anymore because it's a waste of time arguing with propagandists hell bent on changing the narrative to suit their agenda.

But Bandoul, there's more to Naharnet than this couple of propagandists hiding under 30 different nicknames. It's our duty to prevent them from winning the public opinion through deception. Keep in mind you're not alone here... although I come less often than I used to... I noticed I wasn't the only one.

Poor miserable FreeThrow suffers from such an inferiority complex that every time someone points out something negative, he thinks it is about him. He thinks he is the top political analyst and security adviser in the country and everyone should hang on his every proclamation....7aram, what a difficult complex to have...I am sure you take your keyboard with you to the bathroom to make sure you don't miss a thing considering how often and how quickly you vomit your anti-social propaganda on Naharnet. You must be a glutton for punishment considering how many times bibkha3ak 3al t2eel and you continue to beg for more...no worries it's my duty to clean the floor of decaying orange peel.

" most the dead are combattants" waw where did you get the figures? lol

I have to admit it is funny.

This is pure comedy gold.

Finally they will be caught and brought to justice.

“They are involved in crimes of terrorism and therefore considered to be terrorists who can be captured by international criminal law,” he told SANA.

LMAO.....the pot calling the kettle black. Also...'violation of international law'...first you have to be recognized by the international community before you can claim being part of it. You and your affiliates (HA/Iran) are recognized as TERRORISTS! Period!

"only saqr deserves a home trial for collaboration and for denial of facts,as well as forging evidence after initially admitting their veracity. "
collaboration? with which enemy? FSA have been officially declared enemies of the state of lebanon? when? remember when aoun wanted the assad family to be ousted...so sakr does what aoun wanted for years... better revise your logic!
forging evidence? says who? alakhbar close to hezbollah? lol! did any judge say they were forged? oh! but you know better.

denial of facts? is that a crime? nobody can deny facts in front of the press? now it s a crime? LOL! your buddies do that as a national sport!!!

can t alakhbar and otv known as close to M8 have set up recordings? isn t that an option too?
but i guess you have all the pieces of evidence at home to be so sure of yourself

when M8 is accused, either you say this man is not from M8 or you say we should wait for the justice to do its job! so apply your rules first to yourself instead of lecturing people...

Not until hell freezes...Assad is delusional...

Definitely delusional, think about all the hashish HA provides him...and doritos when he has the munchies, cheese flavored.

...because slaughtering your citizen is abiding to international laws.

Hey Syria, in case you haven't noticed the world is pulling their recognition of you. Your blah blah blah is not even being heard.

*If* they want, not *of* you silly flamer

That attorney-general looks like a Mafioso himself. What a government of thugs.

Violation of international law....so is mass killings of civilans....you retards.

Well, since he and his family has regime/HA guns waiting if he slips up, he has no choice but to say what he's told to say.

Entertainment to the Highest Level

You have to be a Gringo to be that Stupido. No wonder You stink all over the world gringo pendejo.

Spare us your repulsiveness and crawl back into Hassan's rectum and let us know when Aoun is going to pop his head out. Oh I forgot its every turdy Tuesday ....
In that case forget the bearded lady and crawl back to Bachars

It is always funny and most peculiar, when a regime, such as the Assad Regime, has existed for decades thumping its nose at international law or at any law, when it is aggreived, start to point to the law books and demand arrests in the name of the law.
According to major powers of the international community, the Assad Regime is no longer the legitmate government of Syria.
When you do not live by the law, how can you seek refuge under its protection? The only "law" known by Assad is the law of survival and if this requires breaking the law, then it is broken, and if it requires seeking assistance of the law, then he seeks it.
But this is not how the civilized world works. We have laws, we all live under them and do not seek protection of the law only when it serves our interest.
I suppose he wants an arrest warrant next for the Turkish PM, the King of Saudi Arabia and the Emir of Qatar.