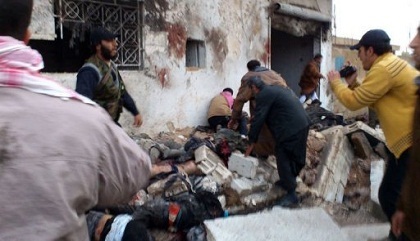 A "terrorist" group attacked the rebel-held town of Halfaya in central Syria killing women and children, news agency SANA said on Monday, rebuffing claims the deaths were a result of a regime air strike.

The opposition Syrian National Coalition meanwhile blamed the "criminal regime" of President Bashar Assad for committing what it described as a "crime against humanity" in the town.

The Syrian Observatory for Human Rights said more than 60 people were killed and at least 50 wounded in the town on Sunday, accusing aerial forces of bombing a local bakery.

SANA, the official news agency, however gave a vastly different account, citing residents of the town located in the central province of Hama.

"An armed terrorist group attacked the town of Halfaya committing crimes against the population, killing many women and children," it said.

The report added that the Syrian army intervened during the assault and "killed and wounded many terrorists", a term officials and state media use to refer to rebels fighting to oust the Damascus regime.

The opposition National Coalition, which is recognized by dozens of countries and organizations as the legitimate representative of the Syrian people, blamed Assad's regime for the "massacre" in Halfaya, saying it "targeted children, women and men who went out to get their scarce daily bread ration."

"The Syrian Coalition is taking action on several tracks considering all possible measures to prosecute those criminals who were involved in the Halfaya massacre on December 23, 2012 and bring them to justice," it said in a statement.

The Syrian National Council -- a key opposition group -- meanwhile blamed the international community for "being responsible for this massacre... by not supporting the Syrian people."

During the summer, rights groups accused government forces of committing war crimes by dropping bombs and using artillery on or near several bakeries in the northern province of Aleppo.

International peace envoy Lakhdar Brahimi met Assad on Monday, a day after arriving in Syria to launch a fresh bid to resolve the brutal 21-month conflict that has already killed more than 44,000 people.

I am surprised SANA did not accuse Israel. It is a joke.

This should be easy enough to prove. The Syrian government knows it will be held accountable eventually. The Syrian National Coalition knows it can say whatever it wants and not be held accountable, nor will Western backed terrorists who will disappear into the night (And a few into Lebanon). Who got in front of this story? I would wager on who is lying with any of you, even backed if you are backed by Harari money from the House of Saud..

oh yeah man it was those dang terrorists with the MiG fighter jets...can't dispute that...