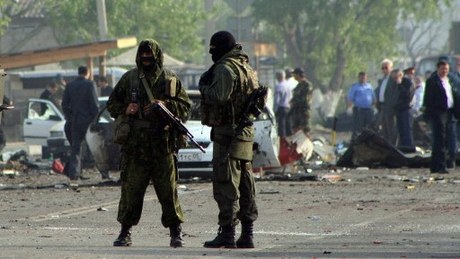 Russian security forces have killed seven suspected Islamist rebels in the North Caucasus region of Dagestan in an operation that saw the militants briefly take a six-year-old girl hostage, officials said on Saturday.

Security forces surrounded an apartment block in Dagestan's main city of Makhachkala Friday night where the militants were hiding, the National Anti-Terror Committee (NAK) said in a statement published by Russian news agencies.

The rebels opened fire as the other residents were being evacuated, including the wife of one of the militants who was in the besieged apartment, it said.

Security forces returned fire, killing three of the militants. Those still alive smashed through the wall into a neighboring apartment and took a six-year-old girl there hostage.

"But thanks to the coordinated and professional actions of the special forces, the girl was freed and and remaining bandits were neutralized," the NAK statement said, using the standard official language for killing militants.

It said the security forces killed six people inside the apartment block and another suspected militant who opened fire outside.

One of those killed was the chief of the criminal group named as Gadzhimurad Dolgatov, it said. The group had been planning robberies and murders in Makhachkala, it added.

Dagestan is currently the most unstable region in the conflict-plagued Northern Caucasus, with rebels staging attacks against the pro-Kremlin local authorities on an almost daily basis.

Rights activists often express concern at the authorities' approach to often arrest people suspected to be militants without due process, and force them to confess or even plant evidence to make a strong case.