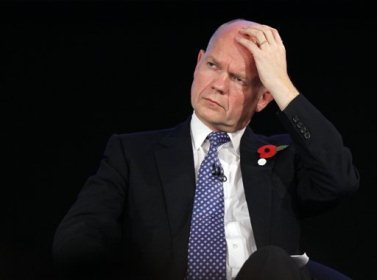 Britain will host a two-day meeting on Syria starting on Wednesday, officials said, bringing together academics and the opposition to prepare for a future without President Bashar Assad.

Experts in post-conflict stabilization will join representatives from regional Arab partners, multilateral agencies and the leadership of the opposition Syrian National Coalition for the closed-door talks, the Foreign Office announced.

"The UK's objective is to galvanize international thinking and planning on a Syrian-led political transition," a spokesman said.

"We're doing everything we can to bring an end to the violence in Syria and achieve a genuine political transition."

British Foreign Secretary William Hague has said repeatedly that Assad's departure from power is "inevitable" following a conflict that has so far raged for 21 months and killed more than 60,000 people, according to the United Nations.

The talks in Britain are intended to help international supporters of the Syrian opposition prepare for the significant challenges it would face in a post-Assad Syria, particularly on security.

In a rare speech on Sunday, Assad offered to hold discussions with Syria's opposition to end the conflict, but only with those elements he deemed acceptable, not rebel-affiliated groups he termed "killers" and "terrorists" led by foreigners.

The Cairo-based Syrian National Coalition, the main, internationally recognized opposition group, immediately dismissed the offer, repeating its insistence that the president step down before any negotiations could be considered.

The British talks will be hosted by a senior civil servant, David Quarrey, the head of the Foreign Office's Middle East and Africa desk. Junior foreign minister Alistair Burt will close the event on Thursday afternoon, but he will not attend the talks themselves.

The meeting will be held at Wilton Park, a former stately home on the south coast of England which has hosted international conferences dating back to post-World War II discussions on how to restore democracy in Germany.

The media have not been invited but a statement is likely on Wednesday, a Foreign Office spokesman said.

They've been preparing for two years. Not that it matters, Assad isn't going anywhere.

Christie, I disagree. I think he is going to hell.