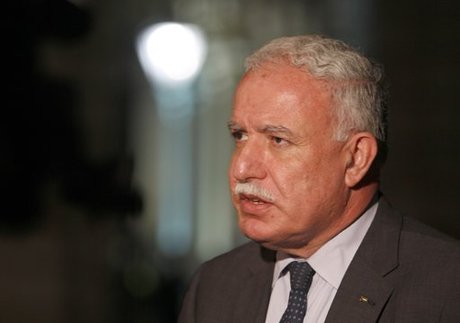 But Malki told the U.N. Security Council that actions by Israeli Prime Minister Benjamin Netanyahu since U.N. members recognized the Palestinian state in November have been "the complete antithesis of the two-state solution."

"In the wake of the Israeli elections, Palestine is willing to work with any Israeli government to be formed provided that it is committed to the General Assembly resolutions giving effect to the state of Palestine and to the pre-1967 borders," Malki said.

The Palestinian minister said the deadlocked peace process is now at a "crossroads" as he renewed condemnation of Israel's settlement of the occupied territories and its offensive on Gaza in December.

Israel must choose between "a meaningful political process" or "force us into an era in which that solution is abandoned and the Palestinian people enter a new stage in their struggle to defend and achieve their rights through all peaceful, political, diplomatic and legal means available," Malki said.

"The major obstacle to the two-state solution is the Palestinian leadership's refusal to speak to their own people about the true parameters of a two-state solution; to speak a lexicon of peace, not a litany of war," he told the Security Council meeting on the Middle East.