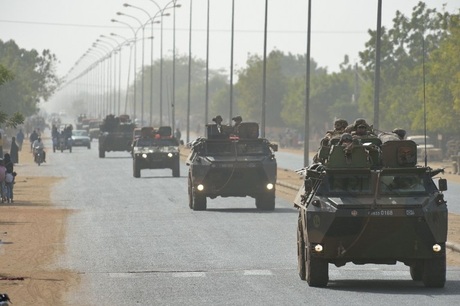 French and Malian troops advanced on the key Islamist stronghold of Gao on Friday after recapturing the northern town of Hombori, as the extremists struck back by bombing a strategic bridge.

The French-led assault against the radical Islamists controlling northern Mali entered its third week with a strong push into the vast semi-arid zone amid rising humanitarian concerns for people in the area facing a dire food crisis.

"At present, Malian and French soldiers are in Hombori. There are no longer any Islamists on the ground," said a teacher in the town which lies 920 kilometers (575 miles) north of the capital Bamako and 200 kilometers west of Gao.

A Malian security source said the troops would press on to the eastern city of Gao, one of the three major northern towns along with Kidal and Timbuktu, where the al-Qaida-linked Islamists have imposed brutal sharia for 10 months.

Two French men were kidnapped in Hombori in November last year and are still in captivity. The Al-Qaida in Islamic Maghreb (AQIM) claimed the abduction.

The security source added that in the west, the French-led forces who had recaptured the town of Diabaly on Monday, were pushing towards the town of Lere with the aim of "taking control of Timbuktu" which lies further north.

Gao, Timbuktu and Kidal were seized by an alliance of Tuareg rebels -- who wanted to declare independence of the north -- and hardline Islamist groups in April last year.

The Islamists hijacked the rebellion and sidelined the Tuaregs to implement radical Islamic laws, flogging, stoning and executing transgressors, forbidding music and television and forcing women to wear veils.

France swept to the aid of the weakened Malian army on January 11 as the Islamists pushed south towards the capital Bamako amid rising fears the zone could become an Afghanistan-like haven for terrorism.

They have bombarded both Gao and Timbuktu with airstrikes, sending the Islamists fleeing.

However the insurgents remained on the offensive, blowing up a key bridge linking Gao to neighboring Niger on Friday, where more than 2,000 Chadian soldiers and 500 troops from Niger are being deployed to open a second front against the Islamists from the east.

A security source from Niger confirmed the strike.

A Malian trader, Oumar Maiga, told Agence France Presse by telephone that a truck headed towards the bridge had failed to notice it was no longer there and crashed, killing two and injuring three.

French aid group Action Against Hunger (ACF) raised fears "that an armed ground intervention from Niger will cut the last access route to supply basic goods (food and medicine) to people in the region," a statement said.

The French-led offensive has received broad international support, but there has also been increasing alarm about reports of rights abuses by Malian soldiers against ethnic Tuaregs and Arabs.

"Like in previous northern Malian conflicts, many civilians of Arab and Touareg origin have been targeted by the military simply because of their ethnicity and unsubstantiated rumors that they are protecting the rebels, said Yacouba Kone, of the UK-based Christian Aid.

The International Federation of Human Rights Leagues said at least 31 people had been executed in the central town of Sevare, and some bodies dumped in wells, according to local researchers.

Meanwhile west African defense chiefs planned to review progress on the limping deployment of their forces to Mali at an emergency meeting in Ivory Coast on Saturday.

The Economic Community of West African States has pledged more than 4,500 soldiers to help Mali retake its Islamist-occupied north, but the deployment has been delayed by financing and logistical problems.

An additional 2,000 soldiers from Chad, which is not an ECOWAS member, are also to be deployed.