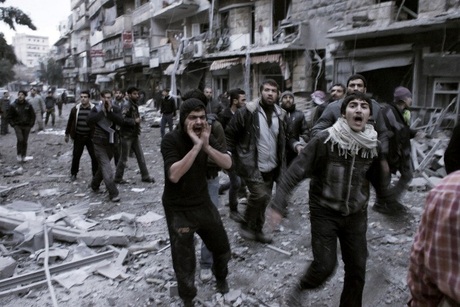 Violence showed no sign of abating on Friday on Syrian battlefields as protesters slammed both the regime and rebels fighting to overthrow it.

The regime's air force launched air raids on several rebel-held towns, including in Damascus province, said the Syrian Observatory for Human Rights, which relies on a broad network of activists, doctors and lawyers.

Activists reported an escalation of the army's fierce campaign to reclaim insurgent-held areas in Homs in central Syria, which lays on the strategic route linking Damascus to the sea.

In Homs city, the army shelled the Juret al-Shiyah and Khaldiyeh neighborhoods, which have been bombarded frequently since the start of the anti-regime revolt in March 2011, the Observatory said.

At least 129 people were killed in Friday's violence, the Britain-based monitoring group said, including 40 civilians.

And while state-run SANA news agency said many Syrians heeded a call by the government and prayed for security on Friday, protesters in flashpoint areas demonstrated for Assad's fall.

Amateur video shot in Houla, in Homs province, showed dozens of protesters on the streets despite army shelling.

Meanwhile in Saraqeb, in the northwestern province of Idlib, activists said protesters also demonstrated against the jihadist al-Nusra Front rebel group which is listed by the United States as a "terrorist" organization.

"No to the rule of foreigners, no to military rule, no to terror and fear," read posters held up by the protesters.