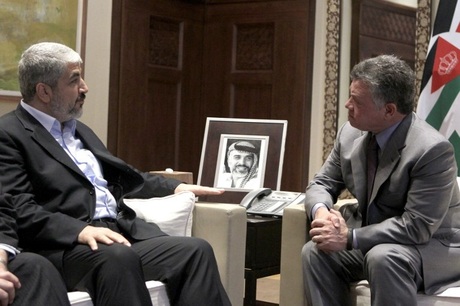 "I am optimistic about the Palestinian reconciliation. The international community must respect Palestinian need to end division," Meshaal was quoted as saying after meeting the king in Amman.

"We have made excellent steps in the reconciliation talks in Egypt," he said of long-running talks between Hamas and the rival Fatah faction of Palestinian president Mahmoud Abbas.

Earlier this month, Meshaal and Abbas agreed in Cairo to expedite a stalled reconciliation deal between their groups.

Meshaal and Abbas focused on implementing the Egypt-brokered April 2011 unity agreement aimed at ending years of infighting that was signed in May that year, but whose main provisions have yet to be put into practice.

The Palestinian national movements' rivalry exploded into violence in June 2007 when Hamas forces seized control of Gaza a year after they won a landslide victory in parliamentary elections.

"Supporting reconciliation efforts is the basis for Palestinian unity which will help the Palestinians restore their rights," the king told Meshaal.

"A two-state solution is the only means to achieve security and stability in the Middle East," he added.

Relations between Hamas and Amman have been strained since 1999 when the authorities expelled Meshaal and three other Hamas members after the group was accused of threatening the kingdom's security and stability.