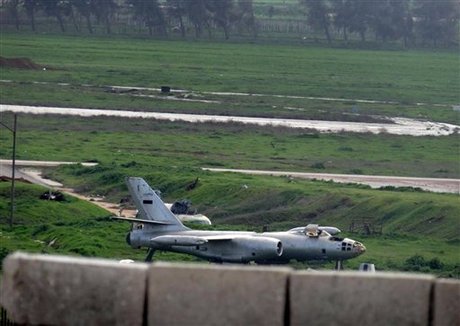 Clashes erupted at dawn on Saturday around Aleppo airport and a nearby airbase, as Syrian troops bombarded the Golan ceasefire zone bordering Israel in response to rebel attacks, a watchdog said.

The rebel fighters "clashed with government troops in the vicinity of Aleppo international airport and Nayrab military airbase on Saturday morning as shelling was heard in the area," said the Syrian Observatory for Human Rights.

The insurgents are pressing for more gains in the northern province of Aleppo after seizing Al-Jarrah military airport and a military complex tasked with securing the international airport this week.

They see the capture of the airports as a way of seizing large amounts of ammunition and to put out of action warplanes used by the regime to bombard rebel-held areas.

The latest violence in the area comes after more than 150 combattants from both sides were killed in the battle for Base 80, the now rebel-held military complex that was tasked with protecting the strategic airports.

Also on Saturday, fighting erupted in the Golan Heights as rebels overran a military police checkpoint at Khan Arnabeh, a town just beyond the outer ceasefire line along the demilitarised zone bordering Israel, said the Observatory.

The rebels captured weapons and a tank after seizing the checkpoint, and blew up the tank when regime forces began to retaliate.

The army shelled Khan Arnabeh and the nearby village of Jubata al-Khashab, located inside the ceasefire zone.

The Golan has been tense since the outbreak two years ago of the anti-regime uprising in Syria that has turned into a bloody insurgency, at times spilling over with mortar and gunfire into the Israeli-held zone.

Regime forces meanwhile killed a key commander of the jihadist Al-Nusra Front on Friday night, also losing seven of their own men when they attacked his safehouse near the rebel-held city of Shadadeh, said the Observatory.

The Al-Nusra Front seized Shadadeh on Thursday after three days of fierce fighting and car bomb attacks that left more than 100 troops dead.

The clashes come a day after 170 people -- 39 civilians, 53 soldiers and 78 rebels -- were killed nationwide, according to the Observatory, which relies on a network of activists, medics and lawyers on the ground for its reports.

Where is everybody today. I guess no electricity in Lebanon.

Did you not hear? the war of liberation of the Golan from its remaining inhabitants has started. Poor Israelis! They must be in shock and awe! Long live the axis of resistance.

They are watching Ma Fe Metlo

they only bomb golan when syrians opposed to bashar are there, never did he bomb it to liberate the territory! LOL
and M8 still calls them "resistants" hahahaha!

hey Gabby, you think FSA is the ressistance I guess, wooow
They are liberating Aleppo, Der Zorr and other cities and towns, by kidnapping priests, monks and other people, or watch the u tube where all your buddies are dismantling all the factories and manufacturing facilities and transporting them to their brothers in Qatar

hey abraham tell us in what way the baath regime is better and people shall support it?

who said baath regime is better than lets say you
All I said was where are these supposed revolutionaries, what are they doing kidnapping man of cloth, who have nothing to do with the regime.