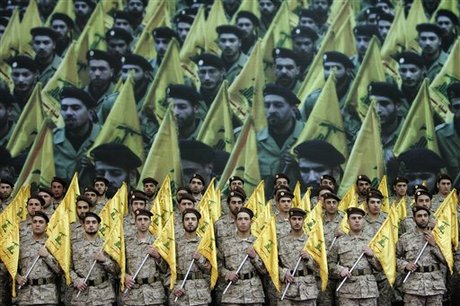 Three Hizbullah members have been killed on Wednesday in an attack by the Islamist al-Nusra Front in a border town between Lebanon and Syria, the Turkish state-run Anadolu agency reported.

"The attack targeted a Hizbullah patrol in (the Bekaa border town of) Zeeta, killing three of the party's members,” informed sources told Anadolu.

The sources revealed: “The party had an agreement with the Free Syria Army to neutralize these towns from the ongoing Syrian conflict”. “But Hizbullah has since the attack readied to deploy members in eight frontier villages”.

The Syrian opposition has long accused the group of helping the Syrian leadership crack down on the uprising — a claim the group has repeatedly denied.

Hizbullah has stood by Syrian President Bashar Assad since the uprising began in March 2011, even after the group supported revolts in Egypt, Tunisia, Libya and Bahrain. The group says it is backing the Syrian regime because of its support for the anti-Israel resistance movements in Lebanon and Palestine and because it is willing to implement political reforms.

when will hizbushaitan stop meddling in events outside Lebanon?
they want to isolate us and draw retaliations on us.

They're not even Lebanese to begin with.

"Hizbullah has stood by Syrian President Bashar Assad since the uprising began in March 2011, even after the group supported revolts in Egypt, Tunisia, Libya and Bahrain."

Where is the line about "Saudi Arabia supportedm funded, and armed Syrian and foreign fighters against the Syrian government, even after it condemned protests in Tunisia, Egypt, Bahrain, Yemen, Jordan, Morocco, and Saudi Arabia, and also refused to arm Hamas fighters against Israeli air raids."?

i am not a hezbollah supporter, but i certainly won't celebrate their demise when they fight this islamist wahabi filth.

"the Turkish state-run Anadolu agency reported."
english isn't your forte is it?

If we're lucky, the Salafis and Hezbies will kill each other and leave everybody else alone.

hezbollah are nusra are the same.... let them neutralise eachother for a safer middle east.

no lack of knowledge... seems you do not have the capacity to analyze hezbis as a fierce supporter you are... wahabbis, salafis or hezbis are the same islamists extremists. both use the same propaganda, both are terrorists...
sunnis use la ilaha ilallah as a slogan hezbis use the coran in a fist....
no difference only for the hezbis brainwashed islamists....

I do not support Hezbollah but I certainly will not support anyone attacking Lebanon. We must get the hizb to stop and we must stand in the face of any outside aggressor. What a predicament nasrallah is putting Lebanon in again!
Of course we all know where he will be hiding when and if a war breaks out. Keep calling him a hero and looking up to him you mindless sheep.

again brucelee with the same sentence... i see that you are the champion of stupidity as you are only limited to a few sentences... as the number of neurones in your brain, very limited....

i will support them in their fight against hizbocrap.

This is exactly sadly what we have been warning against all along, where are the miscalculations of hizbala taking us..? what is the interest of the Lebanese people in all this? slowly but surely hizbala converted to the PLO of the 70s and will do its community what Hitler did the Germans. another sad things..given the assassination of all the moderates in the suni community the soil is more than ripe for extremism

good riddance--HA is trying to act the victim again to justify any future actions.

Foreign killers killing foreign killers . Good. That is justice . In Syria meanwhile Typhoid fever is present now , Cholera be in Spring. Will Qatar and Saudi Arabia or Turkey or Jordan, NATO or IRAN or Lebanon or the USA or the United Nations send antibiotics. I seriously doubt it. Only Harari can save them.

hizballah or nusra , we cant say good garbage or bad garbage,its garbage full stop.in the orthodox law they are from the same stable...they vote in the same mazbale.

So Saad, are you admitting that they have criminal sexual intentions and seek to rape handsome men such as myself? The only way these radical jihadists are going to ever find someone to sleep with is if they commit suicide and kill infidels.

i guess its time for the anti hizb to go defend what they r defending.OH WAIT no one can do what hizb is doing no one has the ba**s for it..i wanna see if the anti hizb people died that way ..what the reactions would b.am sure the hzb would have being blamed for it....may the rest in peace..no one deserves to die no matter who they r...

Hope there will be many more of those mercenaries eradicated!

you are making the assumption that people consider HA lebanese--and many consider them mercenaries. Now where were you and your cohorts when syrians were shelling lebanese towns and not a word came out of you guys for the loss of life.

Hypocrisy can be such a curse sometimes--learn to live with it or learn how not to be one.

No need to see what side of the fence you are since you on because you failed to address the question and have demonstrated how big of a hypocrite you really are. MEOW

and an fyi, the definition of mercenary is "A professional soldier hired for service in a foreign army."--whose paying the salaries of these HA "operatives"--is it the Lebanese government or some other party like IRAN.

keep winning - more victories - like 2006 and Hizbozo's will win themselves out of existence!