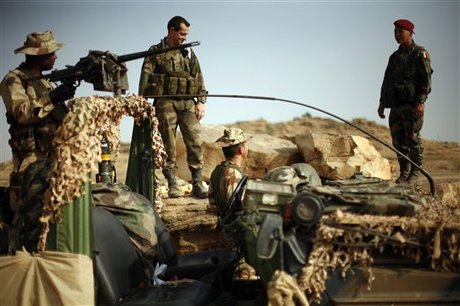 A first battalion of Malian troops trained by EU instructors is expected to be operational in July and ready to deploy in northern Mali if needed, the head of the training mission said Tuesday.

"One can imagine that a first Malian battalion could be deployed as such in July, with its command structures to operate and conduct operations in the north," said French General Francois Lecointre, who heads the 550-strong European Union Training Mission in Mali (EUTM).

Training is scheduled to begin April 2 at the Koulikoro base some 60 kilometers (37 miles) from the capital, Bamako.

Of the 550 troops from 22 nations, some 150 are trainers, the remainder being made up of the protection force as well as medical and administrative staff.

France is the biggest contributor to the force with 207 troops, followed by Germany with 71, Spain with 54, Britain 40, Czech Republic 34, Belgium 25 and Poland 20.

Lecointre said the reference point for the trainers would be the Chadian army, which was well-adapted to its environment, and not a sophisticated Western-style army.