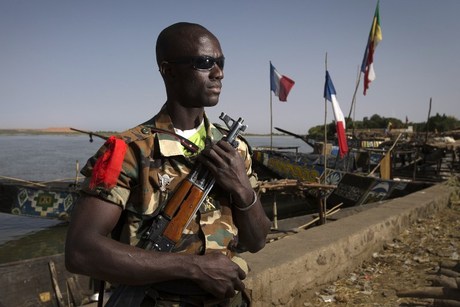 Chad's 2,000-strong contingent in Mali, which has played a leading part in the fight against jihadist militants, on Saturday officially joined the regional African force deployed there.

"As of today, our Chadian brothers who are fighting to liberate Mali are joining AFISMA," Ivorian army chief Soumaila Bakayoko, whose country currently chairs the regional bloc ECOWAS, told reporters.

"This is good news, it will strengthen cohesion," he said after meeting his counterparts in Dakar.

He said a Chadian general would take one of the two vice presidencies of the African-led force for Mali known as AFISMA.

French forces launched a surprise intervention on January 11 in a bid to stop al-Qaida-linked fighters who had controlled northern Mali since April 2012 from moving southward and threatening the capital Bamako.

Islamist groups have largely been forced out of the main cities in the north and are now waging a guerrilla war against French, Malian and other troops seeking to help the government assert its control over the entire territory.

The Economic Community of West African States secured pledges for thousands of troops from its member countries but AFISMA forces have been slow in backing French efforts to retake control of northern Mali.

However Chad, which is not an ECOWAS member, has some of the best trained desert fighters on the continent and has scored major victories after entering northern Mali directly from its northeastern border with Niger.

The Chadian forces were not initially fighting under direct AFISMA command.

AFISMA now comprises around 6,300 troops and is supposed to take over from France, which has said it would start scaling back its operations next month, and help Malian forces secure the north of the country.

Also Saturday, a Tuareg separatist group in the north, the Azawad National Liberation Movement (MNLA), "categorically rejected" an ECOWAS demand for rebels to disarm as a pre-condition for talks with the Malian government, the MNLA said in a statement.

The ethnic Tuareg group, which abandoned its drive for independence in favor of helping France push out Islamist radicals, also pressed for a U.N. peacekeeping mission to be dispatched to help bring calm to the north.