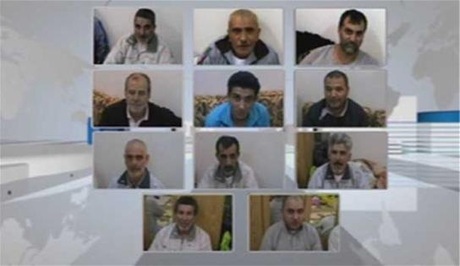 The case of the nine Lebanese abductees in Syria's Aazaz will witness an important positive breakthrough within the next 10 days, a spokesman for the Northern Storm Brigade said on Friday.

And as he declined to clarify the nature of the declared breakthrough, the spokesman told Turkey's Anatolia news agency that “a list containing the names of dozens of Syrian women detainees will be submitted soon to the Syrian regime through mediators, in order to swap them for the nine Lebanese nationals.”

Asked why it took so long to prepare the list, the spokesman said “the circumstances of the fighting against the Syrian regime in the Aazaz area were very difficult and intense over the past days.”

He also noted that “those in charge of protecting the Lebanese were in areas in northern Syria where there is no power feed, the thing that delayed the process of communicating with the mediators and the parties concerned.”

On March 1, the Northern Storm Brigade announced that it is willing to free the hostages in return for the release of all women detainees from the prisons of the Syrian regime.

“After several and repeated mediation efforts by international and humanitarian organizations and committees, we announce that we agree to free the nine Lebanese 'guests' in return for the release of all women detainees held in the prisons of Assad's gangs,” the Brigade said on its Facebook page.

“This is our only demand and we do not want anything else, neither in public nor under the table,” the Brigade noted.

It said the swap deal must happen “in full coordination with the organizations and official committees that are seeking the release of the Lebanese guests, especially the Turkish state and the Arab Gulf countries, topped by the State of Qatar, the Kingdom of Saudi Arabia and the Committee of Muslim Scholars in Lebanon.”

The Brigade described its offer as “an initiative of brotherhood towards the Lebanese people.”

The families of the abductees have stepped up protests demanding their release in recent days.

Earlier on Friday, the families briefly erected a tent near Turkish airlines in al-Azarieh building in downtown Beirut, preventing employees from entering its offices.

On their second day of protests near the Turkish airlines offices, the families of the nine men called on President Michel Suleiman to take a firm stance concerning the matter and to press Turkish authorities to resolve this crisis.

They revealed that the abductees are in the custody of the Turkish intelligence.

“Our endeavors will not be halted and will escalate further,” they added.

Adham Zogheib, the son of one of the kidnapped men, told Voice of Lebanon radio (93.3) that protesters will keep on preventing Turkish refrigerated trucks from unloading shipments at the Karantina fish market, which began on Monday.

On Thursday, the relatives of the nine men vowed to obstruct Turkish interests in Lebanon, calling on the citizens to boycott all Turkish products.

They threatened to protest near Beirut's Rafik Hariri International Airport and to halt inbound and outbound flights.

Eleven men were kidnapped in May 2012 in northern Syria's Aleppo province as they returned by land from a pilgrimage in Iran. Two of them were released in August and September.

They were later taken to the Aleppo town of Aazaz.

The kidnapping was claimed by a man who identified himself as Abu Ibrahim and says he is a member of the rebel Free Syrian Army, but the opposition group denies any involvement in the abductions.

On Monday, the families scuffled with army troops during a protest they held near the Turkish embassy in Rabiyeh.

Last week, the families of the pilgrims stopped Syrian workers in Beirut and its suburbs from going to work in a bid to put pressure on those holding their relatives.