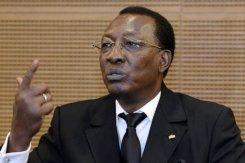 A foiled coup attempt in Chad has left several people dead while a number of others have been arrested in connection with what the government described as a "destabilization plot" in the landlocked central African country, police sources said Thursday.

A shootout broke out on the outskirts of the capital N'Djamena on Wednesday when security forces came to arrest the alleged conspirators, leaving "several dead and around 15 injured", a police source said on condition of anonymity.

Although no official death toll was immediately available, some police sources spoke of six deaths, while others said eight were killed, "three of whom were security forces".

The government serving under President Idris Deby Itno, who himself came to power in a 1990 coup, on Wednesday said a "small group" had been planning the coup for months while police and opposition sources said one of the detainees was an opposition lawmaker.

The situation appeared calm in the Chadian capital on Thursday, with residents going about their usual day-to-day activities normally.

"A small group of ill-intentioned individuals attempted to carry out a destabilization plot against the institutions of the republic," the government said in a statement Wednesday.

The government said the army had "neutralized" the group and that the arrested ringleaders had been handed over to prosecutors for investigation.

"This small group... had been conspiring for more than four months to jeopardize the country's hard-won peace," it said.

A police source said that "several civilians and soldiers, including Saleh Makki," an opposition lawmaker, had been arrested Monday.

Opposition leader Saleh Kebzabo said in an email to Agence France Presse that he received reports of "numerous" arrests in the capital N'Djamena and that "several sources" had confirmed to him that Makki was among those arrested.

France on Thursday said it had noted the latest events in Chad "with concern", and called on the country's government and opposition to engage in "calm and constructive dialogue" with each other.

Chad, once known as one of the world's poorest nations, has had a history of instability.

In March 2006, the government said soldiers and police had thwarted a bid to overthrow Deby's regime and kill him by shooting down his aircraft.

The regime has also faced rebellions in the last few years, especially in the east of the country, which borders the Sudanese region of Darfur.

In 2008 rebels from the border region came close to overthrowing the Deby regime, briefly entering the capital before being pushed back with the help of French forces.

Deby himself first came to power in a coup in December 1990 when he overthrew Hissen Habre, who seized power in 1982 after a two-year civil war. Deby had been Habre's military adviser.

Earlier this year, Chad sent around 2,000 troops to Mali to contribute to a French-led military offensive to dislodge Islamist extremists who had seized large swathes of the north last year.

Its parliament voted this month to gradually withdraw the troops, which are highly trained, well equipped and experienced in desert warfare.

Analysts saw Deby's deployment of the largest African force to Mali as a bid to carve out a role as a force for regional stability.

Chad, which had months ago ordered troops into the CAR to act as a buffer against the rebels, denies the charge.

Congolese officials said Chad's foreign minister would attend a meeting Thursday in Brazzaville to discuss the crisis in the Central African Republic.