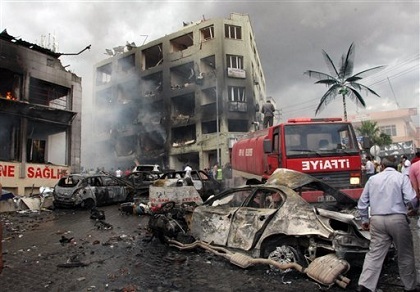 Damascus on Sunday denied accusations it was behind twin car bomb attacks that left at least 46 people dead in a Turkish town near the Syrian border, as Ankara arrested nine people in the probe.

Cranes were seen lifting debris from buildings destroyed by Saturday's blasts in Reyhanli, one of the main Turkish hubs for Syrian refugees and rebels.

The attack was the deadliest to hit Turkey since the Syria conflict began two years ago and apparently provoked a backlash against Syrian refugees as dozens of Syrian cars were wrecked by what local people said were rampaging crowds.

Ankara was quick to blame the Syrian regime for the bloodshed, a claim rejected by Damascus on Sunday.

"Syria did not commit and would never commit such an act because our values would not allow that," Information Minister Omran al-Zohbi said at a press conference broadcast by state television.

"It is (Turkish Prime Minister Recep Tayyip) Erdogan who should be asked about this act... He and his party bear direct responsibility," he added.

"We have established that they are linked to groups supporting the Syrian regime and its intelligence services," he told national TRT television.

On Sunday, Deputy Prime Minister Besir Atalay announced Sunday that "nine people have been held for questioning" over the bombings, adding there have been confessions.

Turkey, a member of NATO, distanced itself from its erstwhile ally soon after Syrian President Bashar Assad started cracking down on pro-democracy protests in 2011.

Ankara has since become a rear base for the Syrian rebellion and Damascus has already been blamed for a string of attacks on Turkish soil.

Atalay said the perpetrators of Saturday's attacks did not appear to have crossed into Turkey from Syria but were already in the country.

Guler said the regional governor had been sent to Reyhanli "to put the necessary security measures in place".

The attack sowed panic in Reyhanli, a town of about 60,000 people.

"I heard the first blast, walked out, thinking it was a missile being fired from Syria. Then I found myself on the ground, my arms and right leg hurting, my ears ringing. It must have been the second bomb," said Hikmet Haydut, a 46-year-old coffee shop owner who survived the blast with minor injuries to his head and body. "I am alive, but all I have is gone," he added.

Foreign Minister Ahmet Davutoglu, on a visit to Berlin, said it was "not a coincidence" that the bombings occurred as international diplomatic efforts to solve the Syrian crisis were intensifying.

"Nothing will go unanswered," added Davutoglu, vowing the culprits would be brought to justice.

The United States and Russia, one of the few remaining supporters of Assad's regime, pledged this week to relaunch efforts to solve the conflict, which the United Nations estimates has killed 70,000 people since March 2011.

and the whole world believes you :)

only brainwashed M8 sheep believe him..

Where is your double FT? Oh, you have the afternoon shift, sorry!

jajaja geha. if the whole world is Iran/hizballa/Nour Maliki, then yeah.... otherwise it's a no-no.

It could very well be, the mercenaries may have done it to elevate the hostility between Syria and Turkey. The Ottomans should not, in first place, have interfered in this internal Syrian conflict. but being paid by the Arabs with the approval of the West, they go one to Islamise Syria in the name of freedom and democracy. A very disgusting situation if we go into the Arabs history. Unfortunately the Arabs do not read and learn from history

geha, I wish you would make your comments longer so that I don't fall into the trap of reading them when they are so short.

"Our values wouldnit allow that". Did they just receive new values from Russia or Iran? They were doing this in Lebanon all the time. Now they all of a sudden have values. Are they chemical values?

Deny.... That's what this killer regime is expert at. Deny murdering Lebanese and their politicians.... Deny sponsoring terrorism throughout the world..... Deny having "political" prisoners..... Deny having "women" prisoners but ready to swap the shia "pilgrims" with 372 women in Syrian jails...... Experts at denying the Syrian people their God given rights for democracy and freedom.

aoun also said that, come on forgot it already? LOL.....

"Terrorist organizations do not stand on their own in terms
of identity; instead, they are proxies to regimes that provide
them with financial means and an operational framework for
their terrorist activities.
Furthermore, let's not forget that the clandestine nature of
these regimes and organizations would allow them to quickly
and easily restructure and reemerge under completely new
aliases, ready to resume operations in full capacity.
Any perceived cooperation in the war on terrorism does not
represent a strategic choice on the part of the Syrian regime to
combat terrorism; it is only a tactical and temporary ploy to
dodge responsibility for the central role that Syria has had in
sponsoring terrorism during the last three decades. "

he didn t say that, huh? poor thing FT... you d better check your alzheimer you are getting stupider by the day....

@peace
do not waste your breath on this Ft character.
he is a Shiite, with the fpm, and seems to have a sole role on this website: post sectarian comments. he must be paid to do so.

Peace, you keep destroying Taqiya Thrower, and humiliating him...... I love it!

Your nickname should be FT Slayer

Who are the experts in putting bombs in neighboring countries in order to kill people randomly and terrorize them?
The Syrian regime is desperate to disrupt the latest accord between the Kurdish opposition and the Turkish government.

erdogan is the one brought all the terrorist to the syria turkish border...whome ever thinks syria did this is to stupid and ignorent to debate

you're going to have to worship his dead body soon.... burried next to Zinab or thrown away into the sea to feed the fish.

Right, not the countless killed during peaceful protests before this became a class A civil war.

I mean, let's completely ignore the record he has in Lebanon and Syria, even raised by a father that went so far to decimate a whole town.

Just a control question, if you don't mind:
The Syrian regime is weakened, embattled, besieged and very soon bankrupt. why would it risk bringing on itself the wrath of the Turkish and Even NATO's military at this point in time?
Is Bashar a ruthless war criminal? Definitely yes.
Is Bashar a retard? I somehow doubt it.

iran and the Syrian regime have a desperate need to sit on a large conference table with the US and Europe, so they can negotiate.
however, the US and Europe told the Iranians at the latest nuclear talks meeting: no deal.
by making a war with Turkey, and/or Israel, and/or Jordan, and/or Lebanon, they would push for a conference (in their mind).

The conditions for this criminal act, its timing and location benefit none other than the criminal enterprise that is called the Turkish government as well as the terrorists who are in the same bed as those, just before Criminal Broker Erdogan's visit to the US.

"Few of u accusing syria being terrorist and planning all bombings around the world .."

so your other examples are irrelevant and off topic here and nobody denies that usa are also a terrorist state :)
and btw all states can carry out terrorist acts for their own interests :)

there is no difference lebcad :)

as usual everyone is going to accuse the other side, nothing new under terrorism!

and here's another thing,

another persian proxy insisting and denying--not that there's anything wrong with that, but just like the boy who kept crying wolf, it just becomes less believable over time.....