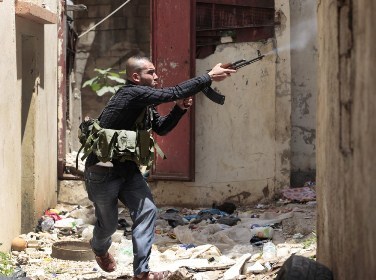 Two soldiers were killed in the neighborhood of Bab al-Tabbaneh in Tripoli on Monday as the army sought to implement a security plan to contain the clashes in the northern city, a statement released by the Army Command announced.

"Ali Shhade and Omar al-Hajj Omar were killed and 6 others were wounded after they came under gunfire from armed groups in Tripoli,” the statement said, explaining that this took place when the army was implementing security measures to restore stability in northern areas witnessing conflicts.

"Army bases in Mallouleh and Bab al-Tabbaneh came under fire from gunmen.”

The military institution warned against the persisting attacks against civilians and against targeting army bases, assuring that it will firmly respond to the sources of fire.

"We call on the citizens to cooperate with the army's measures as they are taken to insure their safety and stability in the city,” the Army Command stated.

The death of the two soldiers brings the toll in the second day of fighting in Tripoli to four, the other two being civilians.

LBCI said that the army's efforts to storm the areas witnessing clashes were met with resistance in some areas, resulting in the casualties.

The deaths prompted residents in the city to block roads in protest against the gunmen's targeting of the army.

Some fighters are refusing to abide by the army's orders to lay down their arms in a measure that is seen as an attempt to maintain tensions in the city, it added.

The army has consequently been opening fire against any gunshots directed against it, it continued.

Moreover, it said that sniper activity has been reported at the Mallouleh bridge in Tripoli, warning that the area is not safe for citizens.

Earlier on Monday, OTV reported that a unit from the Third Rapid Intervention Regiment has entered Bab al-Tabbaneh and the rival Jabal Mohsen neighborhood.

Arab Democratic Party media officer Abdul Latif Saleh told NBN television that the battle is taking place between the army and “the Takfiris whom he has nothing to do with it.”

Kabbara stressed during the meeting with Tripoli's dignitaries that he has asked the parties to pacify the situation and let the army do its job, LBCI said.

In a statement issued after the meeting and recited by Kabbara, the conferees stressed that “the army is performing the duty of restoring security with the needed firmness and fairness, under the law and in the face of all parties.”

They also underlined the need to “restore law and order across Tripoli,” rejecting “any use of weapons against the legitimate armed forces” and urging residents to fully cooperate with security forces to “safeguard their security and foil the conspiracies that are being plotted against them and the city.”

The cautious calm that engulfed Tripoli early Monday morning was shattered around noon by rocket attacks in addition to sniper fire that wounded three people.

The gunbattles between rival neighborhoods - the majority Sunni Bab al-Tabbaneh and Jabal Mohsen, whose residents are from the Alawite sect of Syrian President Bashar Assad - left on Sunday two people dead and at least 26 injured, the state-run National News Agency reported.

NNA said two soldiers and a member of the Internal Security Forces were among the wounded in the fighting.

On Monday, the army carried out patrols and responded to the sources of fire to prevent further clashes.

The Defense Ministry froze the issuing of gun licenses in Tripoli until further notice and the military court tasked military police to carry out the preliminary investigation into the fighting.

Several schools that lie far from the scene of fighting were open while the rest of educational institutions nearby remained closed, the news agency said.

Traffic in the northern city was also slow but the army reopened the international highway that links Tripoli with Akkar district in the area of al-Tabbaneh.

Several Tripoli officials urged the army and security forces to take stern measures against the gunmen.

“We ask the security forces to implement a security plan to calm the situation in Tripoli,” said caretaker Minister Faisal Karami.

MP Samir al-Jisr also said that the only way to control the fighting is for the army to take strong measures.

But the head of the Arab Democratic Party, Rifaat Eid, warned in remarks to An Nahar daily that his supporters will continue to respond to the sources of fire on Jabal Mohsen if the army failed to do that.

Tripoli has seen repeated clashes between Sunnis and Alawites.

In March, at least five people were killed and 26 others were wounded, including army troops, in gunbattles between Jabal Mohsen and Bab al-Tabbaneh.

Just bomb that hole & when done gas the lot.

as long as the army does not take out all the weapons in Tripoli off the hands of people (whoever they are) there will be no peace.
the Syrian regime wants to annex Tripoli and a large chunk of the north, if they can, thus all this activity by jabal Mohsen and hizbushaitan.
just look at a map and see where is Tripoli situated in respect of the line going from Damascus to qusayr to the Syrian littoral.

Why don't they have all out war HA there. Why depend only on Jabal Mohsen residents.

just remind us who settled the alawites in tripoli and the purpose that was behind it?

Tripolistan is worrying for Lebanon's stability.

The army needs to get a backbone and go in and crush these thugs. The indoctrination into the military should only hold one allegiance and that's to the republic of Lebanon and not the republic of Maronites, druze, Sunnis or Shias. This is why Lebanon will always be in the stone ages. No one is for Lebanon. Everyone is influenced by the outside filth. The dream of Lebanon died when Sheikh Bachir died.