Charbel: We Made a Mistake in Not Limiting Syrian Refugees to Camps 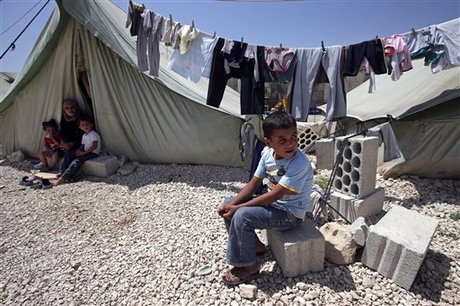 Caretaker Interior Minister Marwan Charbel admitted on Tuesday that the authorities had miscalculated in not building camps to house Syrian refugees escaping the fighting in their country.

In remarks to Voice of Lebanon radio (93.3), Charbel said: “We should have kept Syrian refugees in tents and provided them with all the necessary humanitarian assistance and medical aid … to contain the security violators that are present among them.”

“We made a mistake in dealing” with the issue, he said in response to a question on the presence of Syrian nationals among the casualties in the recent fighting in the northern city of Tripoli.

The clashes between the rival neighborhoods of the majority Sunni Bab al-Tabbaneh and Jabal Mohsen, whose residents are from the Alawite sect of Syrian President Bashar Assad, erupted on Sunday.

“We thank the army for dealing strongly with the gunmen in Tripoli,” Charbel said. It “thought them a lesson that we hope they would never forget.”

The army command said Monday that two soldiers were killed in the neighborhood of Bab al-Tabbaneh in Tripoli.

It said the military sought to implement a security plan to contain the clashes in the northern city.

The army rejected “any use of weapons against the legitimate armed forces” and urged residents to fully cooperate with security forces to “safeguard their security and foil the conspiracies that are being plotted against them and the city.”

now you realize what m14 has been saying all along?

that's what you get for listening to nasrcorap and pretending that nothing is going on in Syria and not taking care of the refugees...guess what, when the government doesn't do its job the people will.

As a syrian citizen I agree that refugees should be kept out of harm's way and be kept in tents, this is what the geneva convention clearly states. It's the duty of the host government to provide refugees with aid along with other humanitarian organizations. The issue however since many people don't remember is that Hezbollah's government denied that there were refugees in Lebanon and as a result these people who had no choice but to escape the brutality of Assad's regime were left hanging and were labeled as "guests". If Charbel wants to act all righteous and apologetic, how about he sends the army to the borders to prevent the Iranian agents hizbilat from entering syria to attack and kill syrians? If he can't get the army to do it why doesn't he has the president to ask the UN to patrol the borders?

PLS send Hizb to contain this mess in tripoli once for all!! and to blow the head of every rebel there...

It takes great courage to admit one's mistakes and I respect that. But when you are in a position to make decisions which affect the lives of millions of people, admitting mistakes is not enough! Even if you are a great man, being in such a position implies that you have to take responsibility for your acts. No country can ever be built without accountibility! (We still have to wait and see the effects of this mistake on our future and the future of our children!)

Never mind, Abou Melhem. This is only a minor mistake, just like the Palestinian mistake before it. Too bad our great good-for-nothing corrupt president-ny-parachute, may God bless him and extend his term and our days of misery under it forever, was absent. Otherwise, his excellency would have caught the mistake on time.