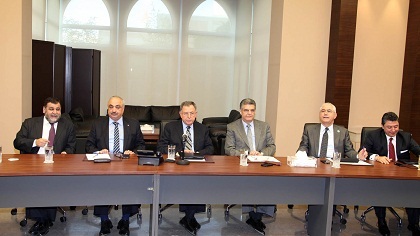 Al-Mustaqbal parliamentary bloc on Tuesday accused Hizbullah leader Sayyed Hasan Nasrallah of toppling the policy of disassociation and denying the articles of the Baabda Declaration, warning against attempts to cause a strife between the army and the people of the Bekaa town of Arsal.

“Nasrallah overthrew the fragile stability in the country because of his involvement in the fighting in Syria, he also buried the policy of disassociation and denied the articles of the Baabda Declaration which Hizbullah has agreed to abide by, in addition to violating the Resolution 1701,” al-Mustaqbal MPs said in a released statement after the bloc's weekly meeting at the Center House.

Responding to the speech Nasrallah gave on Saturday during the commemoration of the South's liberation, the bloc condemned the “criminal activities” Hizbullah is involved in "against the interests of both the Lebanese and the Syrian people," saying that Nasrallah subjected Lebanon to the “fires of the Syrian war."

“The party has transformed itself from a resistance to a militia working under Iranian orders.”

"We urge the parents of the martyrs and those of the wounded to break the silence and voice out their rejection to driving their children to death in Syria and transforming their country into a battlefield,” the statement said.

“Nasrallah has abandoned protecting religious shrines and protecting Lebanese in (the Syrian border town of) al-Qusayr,”

“Instead, he announced now an open war on the Syrian people in general, and on the neighboring country's opposition fighting against the regime in particular,” they MPs stressed.

Nasrallah said before that his party's involvement in Syria's war aimed at defending 13 Syrian villages along the border where Lebanese Shiites live, and the Sayyeda Zeinab shrine, revered by Shiites around the world.

Commenting on the attack that killed three soldiers Monday overnight in the town of Wadi Hmeid in the eastern border town of Arsal, al-Mustaqbal bloc considered that this aimed at causing a strife between the people of the village and the military institution.

Al-Mustaqbal also condemned launching rockets towards the southern suburb of Beirut on Sunday morning, calling on the security forces to reveal the perpetrators and penalize them.

“This crime is suspicious and surrounded with many questions,” the MPs noted.

The Arab league should arm the Lebanese army in order to implement the UN resolutions and the Lebanese laws. Khalas ba2a

Arming the Lebanese army with modern equipment might be effective against a foreign enemy but not the enemy within.

yes mowaten i guess that can be compared with hezbi fighters there in the name of a lebanese party! what a childish excuse....

tell us if the "involvement" of M14 that you claim in syria has led the country on the edge of civil war like hezbis are leading lebanon? NO....
if hezbis were truly working for lebanese interests then they would retreat from syria to spare lebanon from being dragged in the conflict... they would ask for those involved in syria to be trialed in the name of disassociation policy instead of the lame excuse you give! if they were true lebanese!

but of course we all know how respectful hezbis are of the lebanese state and of lebanon....

Stop referring to events, decisions or whats happening in the Lebanese political scene as Hizbullah. It is Iran! People wake up! Party of God! Really? As Muslims you should be ashamed of yourselves and outraged that these people compromised by Farsi agenda are using God's name and association with God in vein for monetary and political reasons.

man...even as a big supporter of the resistance, i could not have seen them enter such a large battle and change the direction of the outcome. I SALUTE THEM, and stand awed by the power they poses. no wonder they bedeviled the most powerfull millitary in the middle east. I would recomend that M14 not cross that bridge again...

mfawaz, what is the big deal if they are strong or not. The issue is that HA is canibalizing the Lebanese state. We have effectively a hizbullastan. Hisbullah has its police, military, controls the border of the country through the airport, harbor and frontier with Syria. Hizbullah has its own foreign policy, decides when to bring war to Lebanon or when to bring war to another country. It has its spying services and participates in destabilizing countries such as Bahrein.

Whether we support the politics of Hizbullah and M8 or not, we need to realize, that Lebanon is no longer a normal state. It has a very strong state within a state, and weakening national institutions.

Is that what we want from the country we live in?

well you just have no proof that m14 have been arming and supporting militarily the rebellion. It is just wishful thinking. M14 has always been clear: distanciation policy yet without hiding their sympathy to Syrian people against the regime.

if hezbis were truly working for lebanese interests then they would retreat from syria to spare lebanon from being dragged in the conflict... they would ask for those involved in syria to be trialed in the name of disassociation policy instead of the lame excuse you give! if they were true lebanese!

they would not use that childish excuse consisting in saying" oh! but there are some lebanese there so why not us!!!"

all the more that bashar said he did not need any hezbis to help him... LOL

1/ asir is no M14...
2/ saqr acted in his name not in the name of a party... why don t you say samaha acted in the name of M8 too then? double standards as usual i guess...
3/ M14 always officially said they distanciate themselves from syrian conflict...
4/ tell kalakh: no M14 involvement other than in your demented mind...

Unfortunately making speeches about Hizbullah's actions have never stopped them from doing what they get paid to do. Hizbullah up the stakes when they got their marching orders from Tehran. The Iranian militia spelled it out, Assad = Resistance and they are fighting to protect their "exposed backbone". In Syrian the Glorious party has not be able to use their favorite military technic of hiding behind Lebanese civilians, that is why they are having all those casualties.