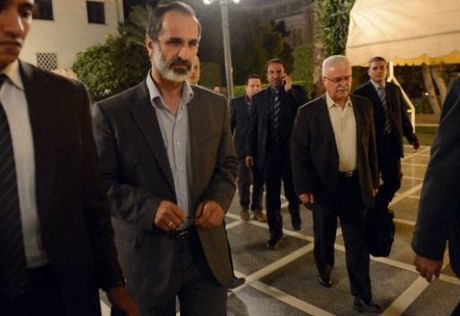 Among the new Coalition seats are "15 from the (rebel Free Syrian Army's) Chief of Staff, 14 members of the revolutionary movements inside Syria and 14 others", said Sabra.

He welcomed the FSA and the activist movements' entrance into the group, adding that "they are the guarantors of the revolution" against President Bashar Assad.

Twenty-nine of the group's seats have yet to be filled. The FSA's seats will go to civilian members of the rebel army, officials said.

Despite extending what was scheduled to be a three-day meeting, the group has failed to agree on a new president and an interim rebel government.

Though Sabra's interim mandate has expired, the election of a president has been postponed till "no later than June 12", said group spokesman Khaled al-Saleh.

The Coalition is recognized by dozens of states and organizations as the legitimate representative of the Syrian people, but it suffers from deep divisions and conflicting international bids for influence that stall its progress.

Sabra said the group had agreed a "plan for the transitional period", but did not elaborate.

The group had also set up agricultural, education and health committees to try and mitigate the humanitarian crisis in Syria, he added.

The Coalition has already said it will not take part in a U.S.-Russian peace initiative, dubbed Geneva 2, so long as key allies of the Assad regime, Iran and Hizbullah, are waging war alongside government forces.

Despite a marked diplomatic presence at the hotel hosting the Coalition's meeting, Sabra denied the group had been pressured into taking any decisions.

"No one can pressure us. Bashar Assad and (his father and predecessor) Hafez Assad before him, in their ugly dictatorships, were unable to pressure us," Sabra said.

"The Syrian revolution... does not accept any pressure," he added.

How can I join? This is high time for nobodies to bolster their dried-up bank accounts.