Ben Ali Denies All Charges on Eve of Trial 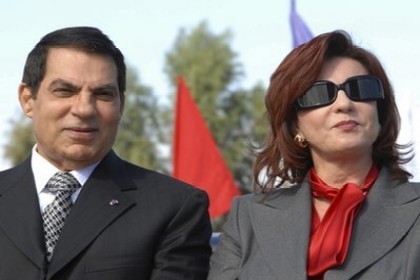 Ousted Tunisian President Zine El Abidine Ben Ali, whose trial begins in absentia in Tunis on Monday, denies all charges against him and hopes his country will "overcome chaos," his lawyer said.

Ben Ali "strongly denies all charges they are trying to press as he never possessed the sums of money they claimed to have found in his office," his Beirut-based lawyer Akram Azoury said in a statement released on the eve of the trial.

Ben Ali "hopes with all his heart that Tunisia will overcome its current chaos and darkness and continue its path to progress," he added.

The former strongman, who fled to Saudi Arabia on January 14 in the face of a popular uprising against his 23-year rule, is to be tried in absentia by a criminal court over some 93 cases against him.

Investigators are trying to establish an inventory of alleged ill-gotten gains amassed by the ousted president and his wife Leila Trabelsi, estimated by the head of a national commission as being worth about a quarter of Tunisia's gross national product.

Ben Ali also faces charges related to drugs and weapons found in a palace in Carthage.

Conviction on these allegations would be punishable by five to 20 years in prison, but other charges of murder and torture -- to be dealt with later by a military court -- carry the death penalty.

Two lawyers have been appointed to defend Ben Ali and his wife in the trials, one in France and the second in Lebanon.

Ben Ali's lawyer in Beirut, who is also the attorney of Jamil Sayyed, a Lebanese brig. Gen. held for four years without charge over the 2005 assassination of ex-premier Rafik Hariri, said he would deny the charges one by one.

"If he (Ben Ali) possessed these exorbitant sums of money, such as were allegedly found in his office, would he not have taken the money with him when he left the country?" Azoury asked.

"The arms that were allegedly found were hunting weapons and mostly gifts from heads of state on their visits to Tunisia," he added. "The allegations of drug possession are but shameful lies and fabrications.

"We urge you to think for a moment: the drugs were allegedly found two months after (Ben Ali) left Tunisia, around the same time the money was found. Is this stupid, ridiculous charge not proof of the fabrication of this entire trial?"

Many Tunisians are happy the once-powerful couple are to face charges but others fear their trial in absentia is merely a ploy to appease demands for justice and change months after the uprising.

Of the 93 charges he and his circle now face, 35 will be referred to the military court, said justice ministry spokesman Kadhem Zine El Abidine.

They include allegations of murder, torture, money laundering and trafficking of archaeological artifacts.

Tunisian authorities have not specified which members of Ben Ali's inner circle would appear before the military courts.

But former interior minister Rafik Belhaj Kacem may find himself named in cases linked to 300 civilian deaths between December 17 and January 14, according to the head of the military justice system, Colonel Major Marwane Bouguerra.

A source close to Ben Ali told Agence France Presse that he is currently in the Red Sea city of Jeddah with his wife, his daughter Halima, 18, and his son Mohammed Zine El Abidine, 6.

Ben Ali has kept a low profile since his escape to Saudi Arabia, with a relative saying in February that he was in a coma after a stroke.

However, he surfaced recently to denounce, through a French lawyer, the proceedings against him as a "masquerade.”

Saudi Foreign Minister Saud al-Faisal said the kingdom gave refuge to Ben Ali on condition that he would not use it as a base to conduct political activities.