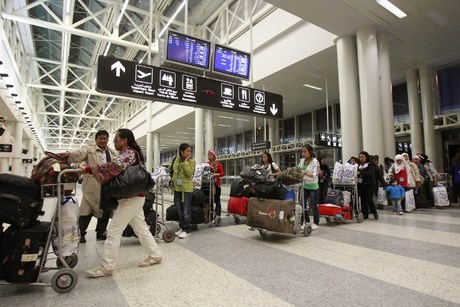 At least 18 Lebanese citizens have been expelled from Qatar, a government source in Beirut told Agence France Presse Thursday, after the Gulf Cooperation Council pledged to act against members of Hizbullah.

"Eighteen Lebanese have been expelled from Qatar, in the wake of the GCC decision," the source said on condition of anonymity, saying it was not clear if they were Hizbullah members.

Earlier on Thursday, informed sources told Voice of Lebanon radio (100.5): “Those who were deported from Qatar belong to one team that was in charge of overseeing an engineering project for the interior ministry and the expulsion is linked to mistakes whose price was paid by the Lebanese team.”

“The expulsion is not linked to the latest reports of a policy of deporting the Lebanese there,” the sources added.

Later on Thursday, caretaker Foreign Minister Adnan Mansour announced that “after making the necessary contacts with Lebanon's embassy in Qatar, we were told that no Lebanese employees were fired or expelled from Qatar.”

“The issue is that a number of employees at the Saudi Binladin Group, which is executing a project for the Qatari interior ministry, were summoned by the public relations and administrative director of the company, who is also Lebanese, with the aim of evaluating their performance,” Mansour explained.

“They had employment contracts ranging between one year and two years and as a result of the evaluation, 21 employees were sacked – 15 Lebanese, one Pakistani, one Indian, one Bahraini, one Canadian and two Egyptians – and the company told them that it is willing to grant them the permission to stay in Qatar should they find another sponsor or to leave Qatar and return after finding a new sponsor,” Mansour added.

He stressed that “there is no decision to deport any employee of the company and therefore any Lebanese expat,” adding that “there is a large number of Lebanese citizens who work in Qatar and the Gulf countries and they are receiving care and appreciation from the brothers in the Gulf, and we should not always attribute the departure of any person to political or sectarian reasons.”

On June 10, the GCC, to which Qatar belongs, said it would implement measures affecting the "residency permits and financial and commercial transactions of Hizbullah" in response to the group's involvement in the conflict in Syria.

The GCC statement urged the Lebanese government to "assume its responsibilities towards the behavior of Hizbullah and its illegal and inhumane practices in Syria and the region."

The decision stirred fears among the many Shiite Lebanese who work in the Gulf of being associated with the armed group.

Saudi Ambassador to Lebanon Ali Awadh Asiri was asked on Thursday if his country would move to expel Lebanese citizens, but said only that the GCC decision "affects those who support Hizbullah."

"Hizbullah has erred against itself, its sect and its country. This decision affects those who have been deceived (by Hizbullah)," he told Future TV.

On June 11, LBCI television reported that “the foreign ministry received a list containing the names of nine Lebanese who work in Gulf countries and whose residency permits will not be renewed due to their political affiliations.”

7000 + will be expelled from the GCC within 2 weeks.
this is what hizbushaitan and fpm are bringing on these Lebanese who went there to work and provide for their families at home.
will nasrallah and aoun feed them and their families?

Geha. to give you an idea of HA's state of mind, listen to what happened with me in 2006.
During the israeli attack, there were a bunch of chiite refugees (HA?) in some schools next to our work. I went in there and said I wanted to help, offering them work so they could live with dignity.
They told me, even before discussing what jobs I was offering that "no we dont need you, Hassan will provide"
This is called mentality of entitlement. They get used to get their free lunch and eat it, and dont fight to make a living. So yes, Nasrallah will probably feed them and their families. He will feed and medicate them just enough so that they survive and keep needing him.
Compare that to the Rafic Hariri who gave a full education to tens of thousands of sunnites so they fly with their own wings....

actually Hariri did that to many Christians, Druze, and believe it or not to shia too! and where did that lead him to? they killed him.
those who support murderers are just murderers.

"hariri never 'offered'. it gave loans, that the students paid back."

yes he GAVE money... i know several hariri students who never had to pay back anything so keep your stupid propaganda for yourself... at least he did something for the youth of lebanon....
we cannot say the same for your clown....

don't talk to hizbocrap supporters about education, the last time most of them were in school was in the 2006 war...

because fpm is turning its rhetoric on the gcc in general, and then the fpmers will start changing accordingly.

because although ft likes to talk big, more than a few lebanese people's livelihood (with a part of them being tayyar supporters in the gcc) is now at stake.
at the end of the day, people will only support political plans if their economic situation is safe. if that is in danger, no one cares what the party's principles are.

who is gloating stupid FT?
by stating facts the way they are, you read it as gloating?
you are truly stupid.....

No worries! Hizbullah will find them jobs in Syria and Iran.

Al Qaeda sympathizers are such cowards. They expect other countries to fight on behalf of their February 14 Saudi-Wahabi leaders, so they rejoice when they see other Lebanese losing their jobs and livelihood. These are the sick, shameless people the civilized citizens in Lebanon are expected to share a country with.

Be careful what you wish for terrorists.

and maybe you should go out to the airport greeting these people with their families and see what kind of reception you get.

you spew venom, but you have no substance--you like using wahabi and aoun in sentences, but beyond that, you are robotic in your responses. you have no solutions, just pointing to problems.

in other words, you are a typical taefi racist

karim- you are always talking about "al qaeda sympathizers"!!!
How can anyone be an al qaeda sympathizer? qaeda is the scum of the world, that is for sure.
But that doesnt make assad who systematically killed any great lebanese leader, whose objective in life is to create strife in lebanon and to plunge lebanon in civil war an ok man. Assad is also scum of the world. Why dont you see that?

Where did I ever indicate that I like Assad? Me and many other Lebanese were peacefully resisting and protesting against the Syrian occupation as unarmed college students before many on this forum were in diapers and while the leaders you revere today were shining their boots. Disliking FSA-Al Qaeda does not automatically mean liking Assad.

Also, can you point out any instance where FPM or March 8 supporters were rejoicing to see February 14 supporters lose their jobs? You are sick, demented, and cowardly if you start celebrating when someone who doesnt politically agree with you loses his job.

who is rejoicing?
we are just seeing the effects of what hizbushaitan and aoun are doing and their effects on Lebanese people!
but NO, you are so blind that you want to see the wrong things and accuse everyone of being an extremism sympathizer, while you fail to recognize the extremism of hizbushaitan and aoun.
when you will start seeing that extremism, then you will become credible.

the supporter of a fundamentalist shia militia calling the unarmed ikhwan a "radical bunch of crazies"...talk about irony.

Of course one should not rejoice when lebanese citizens are loosing their job and being expelled. However Hizb and FPM should assume their responsibility in what is happening and not accuse the GCC or say such things like we do not want tourists from the GCC.

FPM never said that "we do not want tourists from the GCC". Many Christian business owners who rely on tourism are FPM supporters. You're being delusional.

OH yes they said it plainly....

All of you guys are wasting time....Seek gods refuge and just do your jobs but people dont like to work especially the lebanese they want money earned via easy sources.Brother get killed you know why coz the other brother doesnt like him hehehehe.shame on you all lebanese.