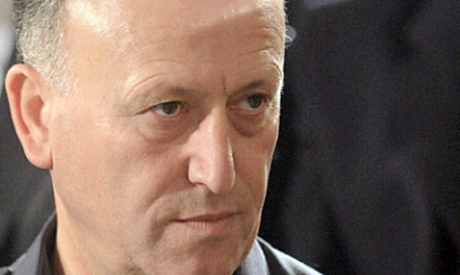 “There is nothing called leaders of frontiers and Tripoli's residents will always count on the state and its institutions,” Rifi said in an interview on Future TV.

“Suleiman Franjieh has been backing Jabal Mohsen with weapons when necessary,” he added, claiming that “arms are being sent to Zgharta through the border with Syria before being transported to Jabal Mohsen.”

“No one will attack Jabal Mohsen and we will protect it the same as we're protecting Bab al-Tabbaneh,” he added.

Commenting on reports of an alleged military role for Hizbullah during the deadly Sidon clashes, Rifi quoted witnesses as saying that “Hizbullah set up artillery positions near homes and publicly erected checkpoints.”

“The casualties among the ranks of the army are bigger than Ahmed al-Asir's ability and I hope the army will conduct a transparent probe,” he added.

He accused Hizbullah and its allies of “unacceptable practices against MP Bahia Hariri in Sidon.”

The army on Monday managed to overrun Asir's security zone in the Sidon suburb of Abra following fierce two-day clashes that left 17 troops and more than 40 wounded.

At least 20 gunmen loyal to the Islamist cleric were also killed in the battle.

Hizbullah MP Hasan Fadlallah clarified Tuesday that his party only defended its positions during the battle against attacks by Asir's group, denying that it played any role in the army's attack on the cleric's fortified security zone.

Turning to the Syrian crisis, the ex-ISF chief said “everyone has been implicated militarily in Syria, as Hizbullah sent trained and organized forces while some parties sent random and unorganized groups to Tall Kalakh and other areas,” adding that “everyone who did that committed a strategic mistake.”

He urged Hizbullah to reverse its decision because “Iran has changed and the region has changed.”

God bless you General, you were the only one working in the interest of Lebanon.... They even manage to wipe out your successor. Allah yo tawwilak 3mrak.

Thank you from the bottom of my heart for eveything you've done in the interest of Lebanon, including the things that weren't released to the media.

Working for the interest of Lebanon? All the assassinations that occurred in Lebanon the last 8 years occurred under his watch. He was one of the most incompetent figures this country has ever seen, and he's an AL Qaeda sympathizer on Saudi Arabia's payroll.

I don't think any lebanese official had or has the ability to stop these things.

He just gives me the creeps.
Now he is enlarging the scope and including the christians in the equation.
May god forbid he ever becomes PM, all hell will break loose.

lol dazed and confused my deepest sympathy, then again what have rifi accomplished? oh no one remember coz the answer is ....?

Suddenly, the "terrorists" seems to be the one that were just defending themselves in Sidon...

each day the truth is coming up in spite of all efforts to cover it up bu hizbushaitan.
asir is scum but hizbushaitan are worse.
what hizbushaitan did in saida to both the army and the city should be out there in the open for all to see this filthy militia wrongs to the country.
and they call themselves ashraf el nas?
they are the lowest scum on tis earth.

Wrong. The result is not good. The first ours one felt the result is going to be good, getting rid of an armed group. But Hezbollahs involvement took all the good out of it.
Now we are just left with questions. Like why would Ahmad el asir attack the army in his own city? Doesnt make sense.
Could it be that Hezbollah and Amal wanted to get rid of Asir and the army felt forced to do it instead of allowing Hezbollah and Amal to doing so and risking a civil war?
Could it be that Hezb members dressed as military attacked them?

I´m against all groups with weapons. Specially Asir. Particulary Hezbollah and Amal. Because these to groups are to "thank" for 100 asirs popping up in Lebanon.

Unless you have actual evidence, I'm not interested. Next.

All of this is to get hizballah and the resistance brigades out of Sunni areas. Can u blame them really?

Who the hell is this assir? He just popped up 2 yrs ago. No one is supporting him, only what he represents. Because in reality it is not fair for one sect to have so much power.

Hizballah has to take a step back and recalculate things. Seems like Qatar has begun doing the same.

I was strictly talking about the general population. Of course he's being funded by Lebanese politicians... Just like Fatah Islam n jund lsham.

We know that already. The question is y would so many young, educated, and otherwise level headed ppl identify with this man assir?... People r fed up, no amount of publicity can buy that. At the very least we have to admit he was right about the apartments being full of men and arms.

Anyway my point was that the average m14, or Sunni to b more specific, is against assir, and against any attack on the army. As is any average lebanese citizen. But ppl r identifying with what assir stands for... A person fed up with hizballah rule.

Why, is the truth too disturbing to your taste?

Well I think we can guess who arms bab tabanneh...

Ppl have never before been so vocal against hizballah. They have lost sooo much prestige!

Are they smart enough to do something about their image problem? I hope so. Some kind of a weapons transition deal would be awesome. Wishful thinking.

The Shiites never were threatened by anyone. If criminals are hiding among them, they need to take them to the nearest police station.

My neighbours in Beirut are mostly Shia, although my neighbourhood was orthodox Christian when my folks bought the house, I've never had a single problem with them. Them, I mean dozens of homes. They even came to protect us when Hezbollah Shiites were trying to abduct us in the 80s. Literally at my door, I was a kid back then.... But being half foreigner was enough for them.

The people are good, the problem is the man hiding in the sewers creating a strife.

There are stories for both sides from the 80's, good n bad. But no one can argue that today hizballah is just a militia for Iranian interests. They can no longer maintain their level of power.

As far as the Shia population goes, from what I see, they mostly love nasrallah. They are not forced to. Hizballah gave the Shia the power they deserved. But now it's time to let go of the weapons, they have a voice now.

maybe this is why you never managed to grow up, i recommend some therapy, bring a pillow, make sure its soft enough so it wont hurt ur hand and visualize ha and beat it
i love trolling in the morning

I can only speak for myself. And im only speaking for myself when I say hizballah has fallen from grace, in my eyes.

I still have 100% respect for em as a fighting force, as a strategical, disciplined army. But we can be honest about the facts as they appear today; hizballah's arms are for the strategical benefit of Iran. Sometimes it coincides with Lebanon's interests, sometimes it doesn't. CONT...

Of course the Syrian conflict was never 50/50. There would have never been a need for nusra. Had Assad called for early elections he woulda prolly got 70% of the vote... But he chose to stick to the 97% his family is used to. And Qatar, the birth-place of democracy, just ushered in a new king :) I'm tired of kings. Meanwhile, Palestine is lost. And our proud Arab armies turned out to nothing more than riot control... And bad ones at that!

Both sides are messed up. I watched u on here go from one of the most even handed is his arguments, to being almost pro Ba'ath, and repeating Assad propaganda.

This is what you want to believe hence justifying your opinion. Better give us hard evidence of what you are putting forward that the Syrian revolution is a Qaeda Nusra affair.

Or it could mean assir had help from the nusra front. After all they did say they found nusra flags in his compound, n he was being aided by Fatah Islam n Jund sham... It's not so far off to think some of these elements within assir's movement jumped the gun, no pun intended, and attacked the army...

But now here are the "fishy" parts:

1. Assir has been talking bout these apartments for a very long time. Why weren't his legitimate complaint investigated.

2. All this started on Sunday, the day before assir was suppose to "do something" about those apartments. Was it a pre-emptive strike against assir?

3. Did the army fight a battle, and lose brave soldiers, just to protect a hizballah spy operations?

Yea, something that khalij doesn't seem to understand, is that money doesn't buy discipline. They throw weapons and ideology at theses ppl, but nothing on how think ahead. I guess most of em are there just to die anyway, so they don't care when it happens, since they won't be around to see it. Gotta almost feel bad for their handlers, its gotta b a tough job.

I c this as a tactical move to try n get hizballah or the resistance brigades out of saida. I think if u look at the top, ull find Bahia up there somewhere.

Jamil Al Sayyed: a peacock and a donkey. Classic!

Thank God you are well retired now. How could we trust someone like him heading our internal forces? He is so anti Hezbollah and Tayyar and extremely biased to Hariri/salafi block. What a shame.

you mean the same "army" that let armed thugs who have a checkopint at Irsal roam free and passed them without detaining them?