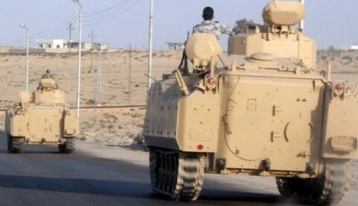 The United States on Wednesday ordered the mandatory evacuation of its embassy in Cairo, just hours after the Egyptian military ousted president Mohamed Morsi.

Asked if reports of the evacuation were true, a U.S. official told Agence France Presse "yes."

A later travel advisory confirmed that "the Department of State ordered the departure of non-emergency U.S. government personnel and family members from Egypt due to the ongoing political and social unrest."

The embassy in Egypt has occasionally been targeted by demonstrators and had already been closed on Wednesday as a precaution. Due to the July 4 Independence Day and the Arab world weekend, it was not due to reopen until Sunday at the earliest.

The advisory warned that "political unrest ... is likely to worsen in the near future."

The State Department advised all Americans "to defer travel to Egypt and U.S. citizens living in Egypt to depart at this time because of the continuing political and social unrest."

An American was killed on Friday in the northern port of Alexandria during a demonstration and "Westerners and U.S. citizens have occasionally been caught in the middle of clashes and demonstrations," the advisory warned.

However the notice stressed that there were currently no plans for special charter flights or U.S.-sponsored airlifts to evacuate Americans from the country.

"If you wish to depart Egypt, you should make plans and depart as soon as possible. The airport is open and commercial flights are still operating, although cancellations may occur."

The U.S. also warned women in particular about rising sexual violence in the country, saying they have often been the targets of sexual assault.

"In a situation that has worsened seriously and with extreme tension in Egypt, new elections have finally been announced, after a transition period," Fabius said in a statement. "France takes note of it."

France hoped a timetable would be drawn up respecting "civil peace, pluralism, individual liberties and the achievements of the democratic transition, so that the Egyptian people can freely choose their leaders and their future," he added.

The Egyptian army said Wednesday it was transferring political power to the head of the Supreme Constitutional Court, Adly Mansour, until early presidential elections were held after an unspecified transition period.

Britain urged for calm and spoke out against the use of military intervention in bringing about regime change, but stopped short of calling it a coup.

"The situation is clearly dangerous and we call on all sides to show restraint and avoid violence," said Foreign Secretary William Hague.

"The United Kingdom does not support military intervention as a way to resolve disputes in a democratic system," Hague said in the statement.

Despite its concerns about Wednesday's dramatic events, Britain called on all parties to move forward and "show the leadership and vision needed to restore and renew Egypt's democratic transition."

"It is vital for them to respond to the strong desire of the Egyptian people for faster economic and political progress for their country," stressed Hague.

This must involve early and fair elections and civilian-led government, he said.

"In the long run only democratic processes and government by consent will bring the stability and prosperity that the people of Egypt seek," added the minister.